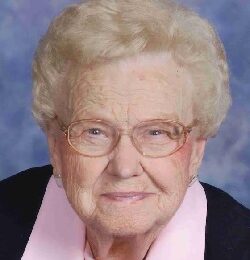 Service will be held at the St. Paul Lutheran Church on Tuesday at 10:30 am.

The clergy will be Pastor Tricia Mattson. Interment will be at the St. Paul Lutheran Cemetery in Springfield, MN.

Norma Augusta Freeman was born October 26, 1919, to Robert and Bertha (Kopischke) Friedrich on a farm near Morgan, MN. The family moved to a farm near Springfield when she was nine. She attended country schools through 8th grade and then helped her family on the farm. On June 12, 1941, Norma married Arnold Voge at St. Paul Lutheran Church in Springfield. The couple raised three children, Janice, Arlon, and Darvin, on a farm west of Springfield. Arnold died in 1959 after complications from heart surgery. Norma continued living on the farm and worked at the Springfield Hospital for 21 years as a housekeeper. On July 11, 1981, she married George Freeman at St. Paul Lutheran Church in Springfield. The couple blended their two families together living in Springfield. George died after they had been married 18 years. Norma was known for her culinary talents and co-owned and operated Countryside Cooks Catering for 10 years. She was a member of St. Paul Lutheran Church where she was active in the Rebekah and Tabitha Circles, helped create many quilts for many missions with the quilting group, and helped with VBS crafts for over 20 years. Norma was a member of St. John Lutheran Home Auxiliary and spent countless hours volunteering at the nursing home. She helped with bingo and played cards and quilted many quilts that the residents pieced together. Norma was also a member of the American Legion Auxiliary, Homemaker Extension Club, birthday club, and 500 club. In 2004 Norma received the Brown County Senior Citizen Distinguished Service Award. She enjoyed quilting, cooking, farming, playing cards, traveling, and vegetable gardening.