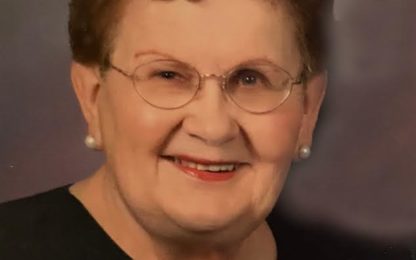 Mary Ann Filzen, age 89, of Renville, MN died on Sunday, September 19, 2021 at RenVilla Nursing Home in Renville. Mass of Christian Burial will be held on Friday, September 24th at 10:30 a.m. at St. Aloysius Catholic Church in Olivia with Rev. Joe Steinbeisser as celebrant. Burial will be in the church cemetery. Visitation will be Thursday, September 23rd from 5 to 7 p.m. at Dirks-Blem Funeral Home in Olivia concluding with a 7:00 p.m. prayer service. Visitation will continue on Friday at the church for one hour prior to the service.  In lieu of flowers, memorials are preferred to St. Aloysius Catholic Church, Renville County Hospice or Renville County Food Shelf.

Mary Ann was born February 4, 1932 in Fairfax, Minnesota to Benjamin and Anna (Knauer) Graml. She was later adopted by August and Anna Thiele. Following her graduation from Fairfax High School in 1950, she was employed as a bookkeeper at the Fairfax Creamery. On February 14, 1956 she was united in marriage to Richard Filzen at St. Andrew’s Catholic Church in Fairfax. They lived on a farm near Hutchinson until 1958 when they moved to a farm south of Danube where they resided until late 2019. In addition to helping Richard with farming, in 1981 she began a career with Renville County as a home health aide. She served 30 years in this care giving capacity, retiring at the age of 79. Mary Ann was a member of St. Mary’s Catholic Church in Bechyn where she taught religious education and was a member of CCW. After the closure of Bechyn, she was a member of St. Aloysius Catholic Church. Mary Ann was a devoted volunteer for the church and 4-H, and enjoyed gardening, baking (some of her specialties were kolaches and cinnamon rolls), embroidery, preserving the produce from her garden, and tending to the cats and kittens on the farm. She especially treasured time spent with her children and grandchildren. Her caring nature and generous spirit will be dearly missed.