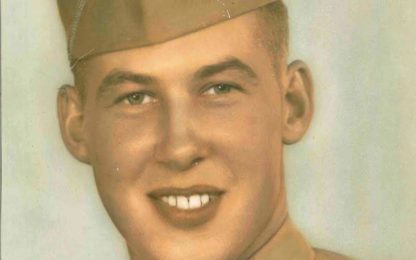 Visitation will be on Friday, January 17, from 9 to 11 am at the Sturm Funeral Home, Sleepy Eye.

Memorial Service will be held at the Sturm Funeral Home, Sleepy Eye, on Friday, January 17, at 11:00 am.

Interment will be held at a later date in Knoxville, IA.

Reception will follow the service at the Sleepy Eye Golf Course.

On line condolences may be left for the family at www.sturmfh.com.

Marvin was born near Knoxville Iowa on Sept. 28, 1931 to Jesse and Velta Briggs. He was preceded in death by wife Alberta, son Michael, Parents and sisters Betty and Evelyn and stepson Steven Goldschmidt
Marvin graduated from Knoxville High School in 1949. Attended the School of Journalism at Iowa City Iowa in 1955 and Mankato University in 1975. In 1953 he was drafted into the US Army and became a Supply Sargent.
When living in Sleepy Eye until 1982 he was a Cub Scout leader, helped organize Aria No. 3428 of the Fraternal Order of Eagles serving as president for three years. He helped organize many yearly events. Besides running his own printing business he became a certified vocation instructor and taught printing to high school students.
He was preceded in death by first wife Alberta, a son Michael, his parents and sisters Betty and Evelyn and stepson Steven Goldschmidt.
Surviving Marvin are his wife Elaine Pelzel Briggs, son Dan of Phoenix AZ, stepdaughter Shelly Goldschmidt Rhode of Reeseville WI, stepson Scott Goldschmidt of Cottonwood CA, and stepdaughter Sarah Goldschmidt Quinnell of Faribault MN
Marvin also was the proud grandfather to seventeen grandchildren and nineteen great grandchildren.