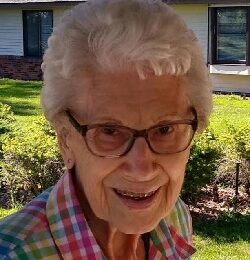 Lorraine Schemel Barta, age 97, of Olivia, MN formerly Renville, passed away on Saturday, November 27, 2021 at GlenOaks Nursing Home in New London. Funeral Services will be Thursday, December 2, at 2:00 p.m. at St. John’s Lutheran Church in Renville. Visitation will be one hour prior to the service at the church. Arrangements by Dirks-Blem Funeral Service of Olivia.

Lorraine Helen (Olson) Schemel Barta was the first girl born in Lake Lillian, MN when it became a town. She was born to Emil and Mary (Lippert) Olson on February 13, 1924. She went to grade school in Lake Lillian and then rode the bus to Bird Island High School. After graduation she worked in E. J. Strom grocery store and was the first female postmaster, both in Lake Lillian. On August 31, 1944 she married Donald Schemel and moved to Renville. To this union two children were born, Wayne and Robert Schemel. Her husband Donald passed away on November 10th, 1976. Lorraine married George Barta in Olivia on March 24, 1984 and moved to Olivia. George and Lorraine spent twenty two years wintering in Texas. George passed away November 2, 2012. Lorraine moved to assisted living April 1, 2013 at Fairview in Olivia. She went on to live at Meadows on Main assisted living in Renville and passed away on November 27, 2021 at GlenOaks in New London, MN. Lorraine enjoyed traveling, playing cards, crafting, and spending time with family.