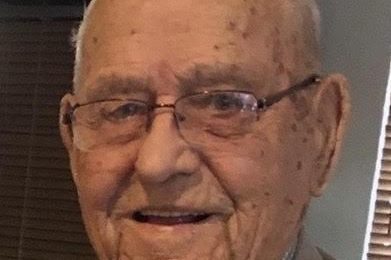 LeRoy John Folkerts, age 97, of Olivia, MN passed away on Saturday, June 20, 2020 at the RenVilla Nursing Home in Renville.  A memorial service will take place at a later time.  Arrangements by Dirks-Blem Funeral Service, Olivia, MN.

He was born to John and Susanna (Minkel) Folkerts on January 16, 1923 in rural Danube.  Lee married Lorraine Lindquist on August 22, 1942 in Olivia.  They were blessed with three children: Dianne, Allen and Myron (Chuck).  As a WWII veteran he received the Purple Heart medal for his action during the Battle of the Bulge.  Being a car salesman was something he enjoyed and he could recall the details of most of his deals.  He was also fortunate to have spent more than 60 winters in Yuma, AZ.