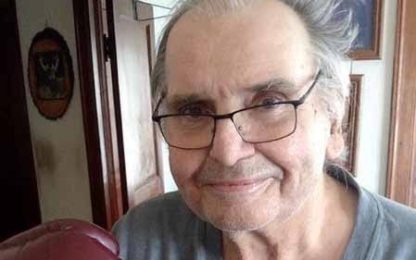 Private Family Service will be held at the Sturm Funeral Home, Sleepy Eye, on Thursday, April 9.

A Public Celebration of Life will be held later.

The clergy will be Father Andy Michels.

Interment will be at Japanese Martyrs Catholic Cemetery in Leavenworth.

Leonard “Lenny” lived most of his life in the Leavenworth area. He took pride growing up in the era where neighbors and family worked hard and helped each other out. He attended grade school in Leavenworth and graduated from St. Mary’s High School. He played baseball for Leavenworth Cardinals, often speaking of the time he was hit by a baseball that caused his jaws to be wired shut, being fed baby food through a straw. Despite this, his love for baseball continued, playing for many teams in Cobden and Jerry’s Mudhens. He served his country for the 452nd General Supply Co., activated in April 1968, sent to Vietnam in September. He was stationed in the Southern outskirts of DaNang, close to the South China Sea and brought home in August 1969. He married Gayle Hinkel on June 17, 1972. They later divorced but remained friends, still integrating family gatherings together. They farmed, raised a family and bought a tavern in Cobden. From “Last Chance” to his nickname “Skinners” he served many patrons over 20 years, many became dear friends. He returned to farming, working the harvest for Del Monte, before retiring. Lenny enjoyed westerns, reading, gardening, camping, spending summers with his grandson and exercising with Brent Mielke who became a precious friend. He loved farming, Farmall tractors and his grandchildren. He was a member of the Japanese Martyrs Parish and VFW Post 800. He recently lost one of his lifelong friends and was ready to be called by God next if it was his time, stating “he lived a good life”.
He is survived by his children, Jennifer (Adam Braun) Hillesheim, Cobden, Amy (Dustin) Wroolie, Akeley, Joel Hillesheim, Port Charlotte, FL and Brandon (Jennifer) Hillesheim, New Ulm, grandchildren, Taylor (Logan Daker) Fromm, Sierra Wroolie and Brock Fromm, siblings, Marion (Dwight) McKenzie, Princeton, Barbara (Richard) Filzen, New Ulm, Bernadette (Thomas) Kachelmeier, Sleepy Eye, Daniel and Anthony, Springfield, several nieces, nephews and other family and friends. He was preceded in death by his parents, Raymond and Odelia, brothers, Fr. Gerald and Marvin and a granddaughter, Savanah.