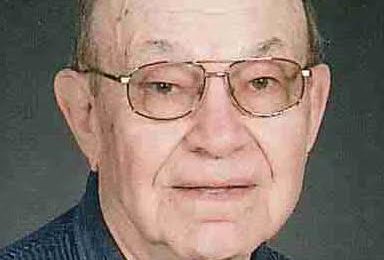 A private mass for family only will be held at the St. Mary’s Catholic Church-Sleepy Eye.

The clergy will be Msgr. Eugene Lozinski. Interment will be at the St. Mary’s Catholic Cemetery in Sleepy Eye, Minnesota.

Arrangements are with the Sturm Funeral Home in Sleepy Eye, Minnesota. Online condolences may be left for the family at www.sturmfh.com.

Jerome “Choke” Koll died peacefully Thursday, May 28, 2020, at Oak Terrace of North Mankato where he resided for the last two and a half years. Choke was born on July 11, 1930 in Elrosa, MN to Herman and Cecilia (Reding) Koll. He grew up on the family farm in Morgan, MN and graduated from Morgan High School in 1948. He married Marian Martinka on October 22, 1951 at St. Mary’s Catholic Church in Sleepy Eye, MN. Together they raised four children. Choke was a wonderful husband, father, and grandfather. He played semi-pro baseball in Sleepy Eye in the 1950’s, and he loved to golf. Choke could often be found on the links at the Sleepy Eye golf club where he was a member for many years. He was retired from Bruggemann John Deere where he worked for 41 years. A proud member of St. Mary’s Parish, Choke was part of the Knights of Columbus, a member of the American Legion Post 0007, and served in the U.S. Marine Corps from 1951-1953. Along with golf, Choke enjoyed watching Minnesota sports teams, spending time with family, and being a member of the “clean plate club”. Choke was a strong, wise man who was loved by many.