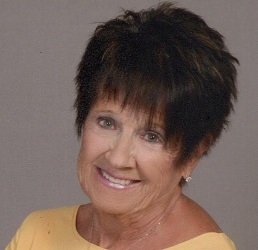 Helen Harazin, age 84, of Bird Island, MN died Thursday, December 9, 2021, at her home.  Mass of Christian Burial will be Friday, December 17th at 1:15 p.m. at St. Mary’s Catholic Church in Bird Island with Rev. George Schmit as celebrant.  Burial will be in the church cemetery.  Visitation is from 11 a.m. to 1:15 p.m. at the church prior to the funeral. Arrangements are by Dirks-Blem Funeral Service of Olivia.

Helen Virginia Harazin was born May 27, 1937 in rural Bird Island to Everard and Rose (Phillips) Osman. She was baptized at St. Mary’s Catholic Church in Bird Island. In 1955, she graduated from St. Mary’s Catholic School, and worked as a secretary at the Hector School. Helen married Jim Harazin on June 21, 1958 at St. Mary’s Catholic Church in Bird Island and they were blessed with five children. They raised their children on a farm south of Bird Island and resided there until moving to town in 2004. Her ability to connect with others served her well when she worked at Athmann’s Inn, the local convenience store, her daughter Theresa’s floral shop, and Jackpot Junction for 19 years. Helen was an avid bowler and horse shoe player. She enjoyed camping, shopping, and planning out where she wanted to eat next. Helen’s true passion was music. It was such a huge part of who she was and her musical talent came natural to her. At five years old she learned to play piano by ear until she attended school and took lessons. She had the ability to pick up any sheet of music and play it beautifully. She would play both the organ and piano while singing for various events. Yodeling was also one of her unique talents that she would do upon request. Helen dated Bill Lothert in high school and after losing both of their spouses, they reconnected in 2016. Together they attended many dances, musical performances including a Donny O’Connell cruise, and spent the past five winters in Arizona. She felt like the “Queen Bee” when they upgraded to the ‘Cadillac’ of golf carts. Playing cards was one of her favorite hobbies; she was part of many card clubs throughout the area, one being the “55 Year Club.” Making time for her family was at the top of her list; she made sure that each and every one felt loved and special. Whether it was a phone call, text, or card in the mail, Granny Helen had her family on her mind. She loved all the sparkle, flowers, glam, and pink. Helen was a classy lady that lived with the mindset “you are only as old as you feel” and she was young at heart with an abundant amount of energy. She was always on the go and at 55 years old she was still able to water ski. Her favorite time of the year was Christmas; everything about the decorating, lights, and gathering together brought her much joy. What a time for her to be called home to her Savior to celebrate Christmas in Heaven.