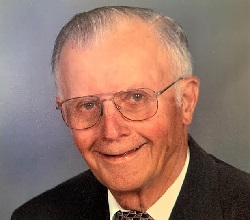 Francis Joseph Goblirsch was born August 19, 1927, in Vail Township of Redwood County, to Frank and Anna (Pelzel) Goblirsch. He graduated from Wabasso High School in 1945. Soon after he was drafted into the Army where he was stationed in Tokyo, Japan, from 1946 to 1947. After his discharge, he returned to Wabasso and started working for R F Druck Motors. He was married to Rita Kalkhoff on August 19, 1952, at St. Joseph’s Church in Clements. In 1977, Francis purchased R F Druck Motors and renamed it Goblirsch Motors. He was a longtime member of the Catholic Order of Foresters, served on the Wabasso City Council, and was a member of the American Legion and the Wabasso Lions.

Arrangements with Sunset Funeral and Cremation Association of Wabasso, MN