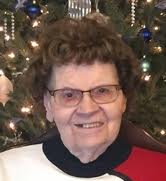 Florence E. Forbrook, age 94, of Morgan passed away Thursday, May 7, at Gil-Mor Manor in Morgan. A Private Family Burial will be held at a later date.

Florence attend District 57 country school in Brown County and graduated from Morgan High School in 1943. She was employed as a bookkeeper at the State Bank of Morgan for four years before her marriage. After marriage she helped her husband on their farm in Morgan Township until they retired in 1989 and moved to Morgan. In 1989 she was employed by the Morgan Industries, Inc. for seventeen years as a bookkeeper. She was a charter member of the Zion Women’s Guild of Zion Lutheran Church and held many offices in that organization. A member of Eden Homemakers Extension Club, member of Gilmor Auxiliary, member of Morgan Senior Citizens Club and volunteered for Meals on Wheels. She also taught Sunday school at the St. John’s Ev. Lutheran and Zion Ev. Lutheran Churches. Florence enjoyed their home on Diamond Lake, doing hardanger embroidery, and working on family genealogy.

She is preceded in death by her parents, husband William, daughter, Lorie Hoffbeck, brother, Armin Steinhaus and son in law Gary Gustafson.