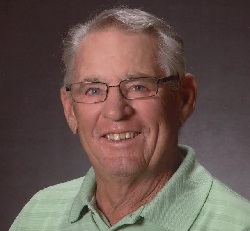 Donald Neubauer, age 92, of Bird Island, MN died peacefully surrounded by family on Monday, May 2, 2022 at RenVilla Health Center in Renville. Mass of Christian Burial will be on Monday, May 23, at 1:15 p.m. at St. Mary’s Catholic Church in Bird Island with Father George Schmit as celebrant. Burial will be in the church cemetery. Visitation will be from 11:15 a.m. to 1:15 p.m. at the church. In lieu of flowers, memorials are preferred to St. Mary’s Catholic Church and St. Mary’s School. Arrangements are by Dirks-Blem Funeral Service of Olivia.

Donald Joseph Neubauer was born on November 25, 1929 to Benedict and Agnes (Baumgartner) Neubauer in Bird Island, MN. He graduated from St. Mary’s High School in 1948, playing basketball in the state tournament. He continued his education at St. Thomas University until he was needed to return home to the farm. Donald was united in marriage to Ruth Jungclaus on November 18, 1950 in Glencoe, MN; their marriage was blessed with four sons. They enjoyed their life together on the farm in Bird Island until Ruth passed in July of 1986. Don was very active in his community serving on many boards including the Melville Township Board, St. Mary’s Church Board, and Bird Island Elevator Board. He was also a founding member of the Southern Minnesota Beet Sugar Cooperative and a member of the Knights of Columbus for over 50 years, earning the rank of 4th Degree Knight. He stayed active by playing slow-pitch softball as the pitcher and coaching youth basketball. He also enjoyed golfing, in which he accomplished a hole in one. He liked to go deer hunting and ice spearing in the winter. Don was united in marriage to Kathleen (Richter) Melander on June 9, 1990 at St. Mary’s Church in Bird Island. They enjoyed spending time together in Pharr, Texas for close to 30 years. Together they loved to go dancing and play in card clubs, Don’s favorite games being Bridge and Pinochle. His mind was sharp, and he was known to his family as a mathematical wizard. Don was a life-long farmer who loved the land for over 70 years; even at the age of 92 he still held the title of ‘Farm Manager.’ Although he planted a variety of crops his favorite to raise was sugar beets. His home would not have been complete without his dogs and cats that he loved dearly. Attending coffee time twice a day at Athmann’s Inn was part of his life for the past 50 years. Don will be remembered for being a loving and devoted family man who held many titles from farmer to grandpa.

Don is survived by his wife, Kathy of Bird Island; his four sons: Dr. Gary (and Janet) Neubauer of New Ulm, Joe (and Monica) Neubauer of Sun City West, AZ, Mike (and Mary) Neubauer of Bird Island and John (and Jody) Neubauer of Olivia; his four step-children: Sandra (and Dave) Flor of Elk Horn, NE, Mike (and Janice) Melander of Hastings, NE, Tina (and John) Wittwer of Lake Lillian, MN and Jen (Dan) Parks of Scottsdale, AZ; his brother Dick (and Fran) Neubauer of Orono, Maine; his 17 grandchildren and 23 great-grandchildren.  Don was preceded in death by his first wife, Ruth; his parents, Ben and Agnes; his brother, Gerald Neubauer; and sister-in-law, Gloria Neubauer.