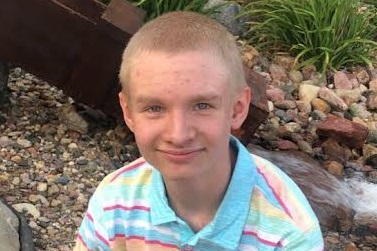 The funeral service for Dominic Borning, 14, of Litchfield, formerly of Echo, will be Friday, August 13, 2021, at 11:00 a.m. at St. John’s Lutheran Church in Vesta. Visitation will take place from 4:00 until 8:00 p.m. on Thursday, August 12, at Sunset Funeral Home in Echo, and will continue one hour prior to the service at the church. Interment will follow the service at the Echo City Cemetery.

Dominic John Borning was born on September 20, 2006, to Christopher and Lisa (Baune) Borning, in Marshall. Dominic was baptized and raised in Vesta, then moved to Echo in 2008, and later moved to Litchfield with his family in 2016. Dominic attended Echo Charter School, Wabasso Public School, and was to be starting his freshman year at Litchfield High School.

Dominic was a determined, hardworking, and caring young man. From the time he could walk he enjoyed being Grandpa Dave’s right hand man! From there he went on to be Mom and Dad’s most valuable asset, whether it be helping with his brothers or using his skills to contribute to the family business. He always looked forward to birthdays and Sunday brunch at Grandma Becky’s restaurant Squirrels. He found his love for four wheelers working with his Dad and Uncle Shawn, building their first race track out at Grandpa John’s farm, and then again at their current farm in Litchfield. He loved spending his time racing four wheeler.

Dominic met many friends at the race track and fit in with everyone there. Many adults took notice to Dominic’s love and passion for anything ATV or dirt bike related. Dominic would often Snap Chat Leon Spinden, Brian Klier, and Seth Fligge, to pick their brain on anything ATV. Seth would often give Dominic a hard time about his Elka Shocks on his Raptor 250.

Dominic was currently building a Yamaha YFZ450 replica of his Dad’s 2009 race machine to start racing next year. Chris and Dominic were planning a trip to the Little Sahara State Park in Waynoka, Oklahoma, to the sand dunes in September. Dominic definitely left a mark in the ATV community.

His most recent hobbies were going fishing up north at Grandpa and Grandma Baune’s cabin, getting his car ready at Grandpa’s shop, and designing things with his 3D printer.

On Thursday, August 5, 2021, Dominic passed away at the Meeker Memorial Hospital in Litchfield, at the age of 14.

He is preceded in death by great-grandparents Ralph and Dorothy Montgomery, Glenn and Elaine Borning, and John Kokesch, and cousin A.J. Maag.

In lieu of flowers, memorials are preferred to the family.