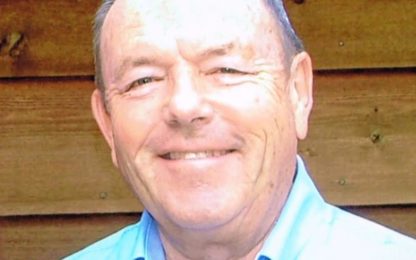 Our beloved dad, David George Wood, of Redwood Falls, Minnesota, passed away peacefully on April 17, 2020, at 9:40 a.m. Daughter Jenny was holding his hand, while daughter Joanie was telling him how much she loved him (via FaceTime from Florida). Funeral Services will be held at a later date at the First United Methodist Church in Redwood Falls, with burial to follow in Redwood Falls Cemetery.

In both his personal and business lives, Dave was loving, generous, selfless, and humble. He embodied loyalty and integrity. His behind-the-scenes generosity benefited countless charities and individuals. Joanie and Jenny are proud to be Dave’s daughters and feel very blessed to have him as their father and Cole’s grandfather.

Dave was the son of Helen and Walter Wood. He began his life in Worthington, Minnesota, and moved to Redwood Falls when he was 5 years old. Dave graduated from Redwood Falls High School in 1953. He was the president of the student council and won the American Legion Award. Dave played the trombone in the band and sang in the chorus. He was also a member of the speech, wrestling, and track teams.

Dave attended college at Northwestern University in Evanston, Illinois, on an NROTC scholarship. He graduated from the School of Speech with a Bachelor of Science in Radio and Television Production. He was a brother in the Lambda Chi Alpha fraternity and participated in the Northwestern marching band and men’s glee club. Dave was a radio announcer for Northwestern’s radio station, WNUJ.

Dave had a distinguished Navy career following college. He was commissioned in 1957 as an Ensign. Dave served on the USS Boston (a missile cruiser) and the USS Lexington (an aircraft carrier). After completing Submarine School, he served on the USS Balao for three years (a submarine that was later painted pink for the 1959 movie “Operation Petticoat”). Dave achieved the rank of Lieutenant, was honorably discharged in 1962, and became a member of the American Legion.

After Dave’s honorable discharge from the Navy, he and then-wife Jackie (Palmer) Wood moved to Pensacola, Florida, where he managed the local FM station WPEX. Upon the passing of his father Walter in March 1963, Dave and Jackie moved to Redwood Falls. They soon had their hands full with twin daughters, Joanie and Jenny. The Wood family enjoyed game nights, walks through Ramsey Park, music and theatre events in Minneapolis, and summer vacations in Pensacola with Jackie’s family. Dave and Jackie parted ways in 1998, with mutual caring and respect.

Dave succeeded his father as co-owner and President of Wood & Conn, Inc. He and co-owner Clair Conn shared the same business ethic: “The only thing that matters in the end is how you’ve treated people.” Dave later became co-owner of Warrior Manufacturing, Inc., with his best friend and neighbor Orrin Estebo. Dave deeply cared for his employees, and they describe him as a dear friend, a mentor, and to one, a father figure. Dave proudly handed over the keys to Wood & Conn to Tim Gilk in January of 2011.

Dave loved his church—the First United Methodist Church. He was an active member, serving as lay leader, chairman of the Board of Trustees, and the star bass voice in the choir. He also was involved in the Masons (Antiquity #91), serving as Worshipful Master, district representative, and a member of the Zurah Shrine.

In his later years, Dave married Joan Sommers. They had an active life filled with travel, social gatherings, and family. They parted after many happy years together.

One of Dave’s greatest passions was golf. He played thousands of rounds at many courses across the country, but his home course was the Redwood Falls Golf Club. His favorite place to be was on the links with his friends. One of Dave’s greatest joys was introducing his grandson Cole to golf (Jenny’s son). Dave shared his final round with Cole and son-in-law Tim.

Dave is survived by his loving family, including daughters Jenny and Joanie; sons-in-law Tim and Gary; grandson, Cole; sister, Mary Menz and her children Nicole and Erik; and cousins, Barb and Maxine Anderson.

Dave was preceded in death by his parents, Walter and Helen (Anderson) Wood. He was also preceded by his best four-legged friend Katy (a Siberian husky).