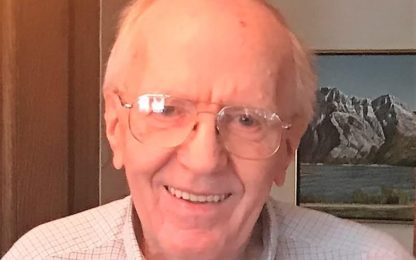 Charles “Chuck” Edward Baechler age 86, of St. Louis Park, MN and formerly of Sleepy Eye, MN died on September 3rd, 2021 at his home with his niece Janel and nephew Jeff by his side.

Visitation will be held at the church on Monday for one hour prior to the service.

The clergy will be Fr. Mark Steffl

He is a survived by his brother, Robert Baechler, his nieces ReNae Wintheiser (Randy) and Janel Schliemann (Mark) and nephew Jeffrey Baechler (Michelle). He is also survived by 6 great nieces and nephews Christopher, Riley, Morgan, Devin, Ben and Josephine. He was preceded in death by his parents Clarence and Elizabeth, two brothers, Paul and Thomas, and sister-in-law Mary Jane Baechler.
Charles was born on August 15th, 1935, in Sleepy Eye, MN. He graduated from St. Mary’s school and MN State University (Mankato), where he received a BA degree in Sociology. After college, he served for six years in the US Army. The majority of service time was spent at Fort Carson, Colorado Army Hospital as a Company Clerk. Following his military career, Charles was employed by the S. S. Kresgue Company in their management training program. Later, he was employed by Powers Dry Goods as an Assistant Buyer and Personal Manager. Chuck retired from the downtown Minneapolis YMCA where he was employed for 25 years as Front Desk Clerk and Resident Manager. After the YMCA, Charles worked as Usher for 12 years for the Hennepin County Theater District.
Charles enjoyed traveling having visited 40 states and Canada. He especially enjoyed his visits to New York City where he had the opportunity to see many Broadway shows and concerts. He also enjoyed visiting his friends in Reading and Johnston, PA. Chuck enjoyed spending time with family and celebrating his love of food. He will be greatly missed.