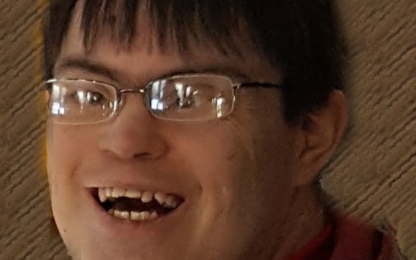 Brian Tersteeg, age 49, of Willmar, MN, died Tuesday, July 6, 2021 at his home. Mass of Christian Burial is Wednesday, July 14th at 11:00 a.m. at St. Aloysius Catholic Church in Olivia with Rev. George Schmit as celebrant. Burial will follow in the church cemetery. Visitation for Brian will be at the church for one hour prior to the funeral. In lieu of flowers memorials are preferred to the Adaptive Curling Club in Willmar and the family will be planting a tree in memory of Brian. Arrangements are with Dirks-Blem Funeral Service in Olivia.

Brian Ronald Tersteeg was born May 5, 1972 in Olivia, MN, to Ronald and Betty (Benesh) Tersteeg.  He grew up on the family farm in Bird Island and graduated from BOLD High School in 1993. During high school years he was an avid sports fan and the football team made him feel very special. He was active in the Special Olympics, which he did with such enthusiasm, until his health wouldn’t allow him to participate any longer. In 1995 he moved to Willmar where he has lived independently ever since. There, Chrysalis providers truly became family to him. Brian absolutely loved seeing people while working at West Central Industries, Subway, and K-Mart. He was a very hard worker and had a good sense of humor. He was able to watch and listen to the Twins and Vikings on the radio and TV at the same time while telling you exactly what was happening.  He had beautiful printing and used graph paper to make many banners. Since he read the West Central Tribune and Star Tribune every day, he would search out his favorite sports superstars and then print their names on his grids. Likewise he always remembered to make and send his homemade cards for all occasions. Brian also loved doing word search puzzles, cooking and curling with his adaptive team. Dancing, shopping for new clothes and dressing up, and vacation trips with his family brought him much joy.

Brian is survived by his parents, Ron and Betty Tersteeg of Bird Island; his brother Timothy of Olivia; his sister Laura (and Randy) Beier of Willmar; his nieces and nephew: Tyler, Mallory, Katelynn, and Emma; and his longtime caretaker and friend Paula Oslund. He was preceded in death by his brother Danny Tersteeg.