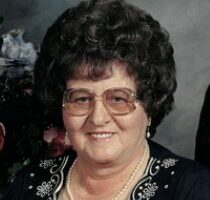 Rita Linsmeier, 88, of Wabasso died peacefully on Friday, December 30, 2022 at the South Shore Care Center in Worthington
Mass of Christian Burial will be:

Minnesota Valley Funeral Home of New Ulm is in charge of the arrangements.

Rita Theresa Linsmeier, age 88 of Wabasso died peacefully on Friday, December 30, 2022 at the South Shore Care Center in Worthington.
Mass of Christian burial will be 11:00 am on Friday, January 6, 2023 at St. Anne’s Catholic Church in Wabasso.  Father Tony Hesse will celebrate the Mass. Burial will follow in the New Ulm Catholic Cemetery in New Ulm.
Visitation will be from 9:30-11 a.m. on Friday, January 6, 2023 at St. Anne’s Catholic Church in Wabasso. Minnesota Valley Funeral Homes of New Ulm are handling the arrangements.
To leave an online condolence for her family, or to sign the guestbook, go to: mvfh.org.
Rita is survived by her daughter, Sandra Witzke of Lucan; sons, Gerald (Cindy) Linsmeier of Kandiyohi, Richard (Renee) Linsmeier of Worthington; son-in-law, Duane Duscher of Lucan; 12 grandchildren, 21 great-grandchildren; 1 great-great grandchild; and sisters-in-law, Connie Stadick, Phyllis Schmidt and Kay Linsmeier.
She was preceded in death by her parents, Joseph and Leona Stadick; husband, Wilbert; daughter, Connie Duscher; twin grandsons, Anthony and Robert Scheiber; brother, James Stadick; brothers-in-law:  Morris Schmidt, Howard Linsmeier; and sister-in-law:  Joleen Linsmeier.

Rita Theresa Stadick was born April 24, 1934 in West Newton Township to Joseph and Leona (Ranweiler) Stadick. On February 21, 1952, she was united in marriage to Wilbert Linsmeier at St. Willibrord’s Catholic Church in Gibbon.  The couple was blessed with four children whom together they raised on their farm near Wabasso. Along with raising her children, Rita also spent time working as a nurse’s aide at the Wabasso Nursing Home and as a kitchen aide at St. Anne’s School in Wabasso. In her free time, Rita enjoyed gardening, tending to her flowers, and trying out new cooking and baking recipes for Wilbert to try. She especially enjoyed being with her family and her little grandchildren, great grands, and great-great-grandchild. Rita will be dearly missed by all who knew her. Blessed be her memory