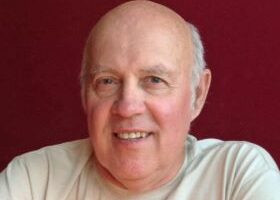 Raymond Robert Wepplo, age 76, of Franklin, passed away at home with his wife and daughter by his side on Tuesday, November 8, 2022. A Graveside Service will be held at 10:30 a.m. on Thursday, November 10, 2022 at the Finnish Apostolic Cemetery north of Franklin, where he will rest in peace. There will be a visitation at noon at St. Luke’s Lutheran Church in Franklin with a Memorial Service to follow at 1:00 p.m. Online condolences may be sent at www.stephensfuneralservice.com. Stephens Funeral Service – Redwood Valley Funeral Home is assisting the family with arrangements.

Raymond Robert Wepplo was born on July 30, 1946 to Walter and Mabel (Grimes) Wepplo of Franklin. He grew up on a farm in Bandon Township and graduated from Franklin High School in 1964. Ray worked at Del Monte until he joined the U.S. Navy in 1965 and trained as a Radar Electronics Technician in California. He then reported to the Naval Air Facility on Andrews Air Force Base in Washington D.C. There he met and married a Navy Storekeep Jeanne Ann Vance who grew up in Ohio. Ray then served on the U.S.S. Proteus (submarine tender) based in Guam during the Vietnam era. After discharge Ray, his wife Jeanne, son Lawrence, and daughter Nancy lived in New Ulm for three years before moving to Franklin, where he resided before his passing. During this time he operated Ray’s Repair and worked at car related businesses until retiring from Auto Value in Redwood Falls. Ray spent his life with a love of vehicles, driving stock cars at several race tracks, and building his Shelby Cobra. He loved displaying his classic cars at many car shows, displaying his many trophies, and going to car races with his family. Ray enjoyed numerous vacations with his family and visited many states and Canada. He never met a cat that didn’t love him or a car that he couldn’t repair.

Ray is survived by his wife Jeanne Wepplo; daughter Nancy Wepplo of Windom; sister Elaine (David) Pearson of Moorhead; daughter in law Beth Wepplo of Willmar; many brothers and sisters in law; and nieces and nephews. He is preceded in death by his son Lawrence Wepplo; parents; parents in law; brothers Roger (Sharon) Wepplo and Ronald Wepplo; sisters in law Sharon Wepplo and Nancy Horkey; and brother in law Dan Vance.