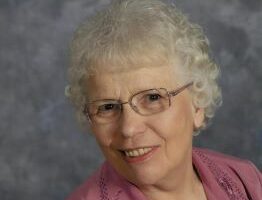 Mass of Christian Burial for Joan Remiger, 89, of Redwood Falls, formerly of Wabasso, will be Friday, October 28, 2022, at 11:00 a.m. at St. Anne’s Catholic Church in Wabasso. A livestream and recording of the service will be available at www.lowafc.org. Visitation will be one hour prior to the service at the church. Interment will follow at St. Anne’s Catholic Cemetery, and a luncheon at the church will follow to honor Joan’s memory.

Joan “Joanie” Agnes Remiger was born February 13, 1933, to Herman and Agnes (Baechler) Zemler, on their farm west of Fulda, MN.  Joan passed away October 23, 2022, at age 89, surrounded by her family at Garnette Gardens Care Suites in Redwood Falls, MN.

Joan was the 2nd child in a family of 11.  Joan attended school in Fulda through 8th grade.  She was needed on the farm to help care for her siblings, and to help her mother with household duties.

Joan met the love of her life, Herbert Frank Remiger, during the winter of 1951, and was united in marriage to Herbert on June 24, 1952.  They made their home on a family farm near Wabasso, where they raised their six children.  They sold their farm in 1980, and relocated to their home in Wabasso.

Joan was a homemaker, childcare provider for children of teachers in the Wabasso area, and she cared for the flowers for the St Anne’s Catholic Church for many years.  She worked as the bookkeeper for the Senior Citizen’s Center in Wabasso, and worked at the Wabasso Nursing home for five years.

Joan was an avid gardener.  She enjoyed her beautiful flowers the most!  She could grow anything – a real “green-thumb” lady!  Joan’s other hobbies included quilting, crocheting, playing cards with family and friends, bowling, and spending time on the lakes of Northern MN with her kids and cousins for many years.  Joan had a very strong faith, which provided her strength and courage throughout her entire life.

Joan is preceded in death by her husband of 51 years, Herbert Remiger, her parents, grandparents, and brothers Edwin, Jim, Thomas, and Fred, and her sister Barbara.