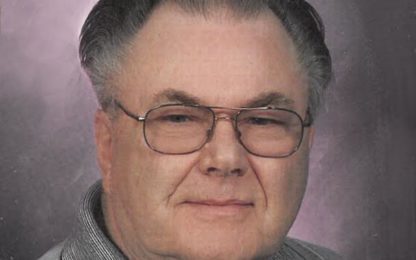 James “Jim” Charles Rima, age 84 of Redwood Falls, went home to be with the Lord, Sunday May 17, 2020 with his sweetheart and best friend holding his hand.  Jim passed peacefully of natural causes at River Valley Health and Rehabilitation in Redwood Falls. Private family services will be held at 10:30 a.m. Friday, May 22 at the Redwood Valley Funeral Home. The service will be broadcasted via Facebook Live on the Stephens Funeral Service Facebook page. Father Tony Hesse will be the officiant.  Jim will be laid to rest in a private ceremony in Beaver Falls Cemetery in Renville County with military honors.  “Grandpa Jim” will be lovingly carried by his grandsons Erik Rima, Aaron Rima, Adriel Johnson and grand son-in-law Dylan Berkey.  Honorary pallbearers will be great grandsons Nicholas and Jackson Rima.  Facebook link may be found and online condolences may be sent at www.stephensfuneralservice.com.  Stephens Funeral Service – Redwood Valley Funeral Home is assisting the family with arrangements.

James Charles Rima was born November 17, 1935 in Worthington, Minnesota to Charles “Ray” and Virginia (James) Rima.  Jim fondly remembers growing up in Worthington and told wild stories of he and his friend’s antics while trying NOT to get caught.  He was known to be a good dancer, had a fast card and always had at least one girlfriend. Jim received his early education in Worthington graduating in 1953.  Jim proudly served in the US Army from 1954-1956 with most of his time spent in Japan. Jim furthered his education graduating from Mankato State University.  Jim married Gloria Freshour in Worthington in 1958.  To this union, Vick and Brett were born.  Gloria later passed away in 2001. Most of his career was spent teaching and coaching first in Walker, Iowa and then many years in Huffman, Minnesota.  Besides teaching history and industrial arts, Jim taught many kids to drive and loved coaching “his” boys in football and wrestling.  His football players would still called him “Coach Rima” and remained lifelong friends. Jim took a break from teaching and owned J.C. Rima Ford and Mercury in Elbow Lake.  At the end of his career he finally retired after many years of teaching Sales and Marketing at Minnesota West Community College in Granite Falls.  He was always a teacher!  Just ask his grandchildren! On September 20, 2002, Jim married whom he called “the love of his life” Susan (Ahrens) Benson in St. Mary’s Church in Alexandria.  They resided in Redwood Falls until his death. Jim loved to golf and hunt, especially deer hunt year after year with “Plumber” up in northern Minnesota.  However, Jim’s first passion was fishing.  He finally gave up his fishing boat just last year.  He’d often remark on why he married a woman from Redwood County with no lake!  He enjoyed wildlife, the outdoors and just being in nature.  Jim was known to like a fast car, boat, anything with a big engine, Johnny Walker red, 1 ½” rare steaks and catching any kind of fish! Jim was a wonderful husband, son, dad and grandpa.  He will be loved and missed always.  Blessed be his memory.