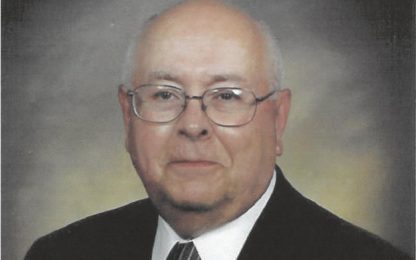 James “Jim” George Lasley, age 81 of Redwood Falls, passed away Thursday, August 12, 2021 at Carris Health – Redwood Hospital in Redwood Falls.  Funeral Services will be held at 11:00 a.m. Tuesday, August 17, 2021 at Gloria Dei Lutheran Church in Redwood Falls.  Visitation will be 4:00-7:00 p.m. Monday, August 16 at Redwood Valley Funeral Home.  Visitation will continue one hour prior to the service at church.  Interment will be in the Redwood Falls Cemetery.  Online condolences may be sent at www.stephensfuneralservice.com. Stephens Funeral Service – Redwood Valley Funeral Home is assisting the family with arrangements.

Jim was born July 8, 1940 to James William and Esther (Sieburg) Lasley in Fairmont, Minnesota.  He graduated from Fairmont High School and later earned his teaching degree from Augsburg College.  After college, he taught and coached at Minneota High School for five years.  While in Minneota, he met the love of his life Ann Reyelts.  On May 20, 1967, Jim was united in marriage to Ann in Britton, South Dakota.  The couple then settled in Redwood Falls, where Jim took a job as boys basketball coach and high school math teacher. He worked for the school district for 34 years, including serving as Athletic Director. After retiring from teaching, he was the Minnesota State High School League – Region 3A Executive Secretary. Jim’s philosophy was to “win with dignity and lose with class.” He is a member of the Redwood Area School District Hall of Fame and the Minnesota Athletic Administrators Hall of Fame.

While teaching, Jim spent most summers teaching drivers training. He served as president of the local United Way and was a proud member of Gloria Dei Lutheran Church, where he was an usher and on the Board of Trustees.  You could often find him playing cards, especially with family and the couple’s bridge club.  He enjoyed all sports, especially baseball, basketball and golf.  Jim attended every Minnesota State High School League State Boys Basketball tournament for 72 years until the pandemic ended the streak. As he was more than happy to share with friends and strangers, he was incredibly proud of his three grandchildren and loved watching them compete in sports.

Jim is survived by his wife Ann; sons: Scott (Heather) of Bowling Green, KY and Paul (Tricia) of Alexandria, SD; grandchildren: Annee Lou, Hayden James and Craig James; and several nieces, nephews and great nieces & nephews. He is preceded in death by his parents and sister, Mary Lou.