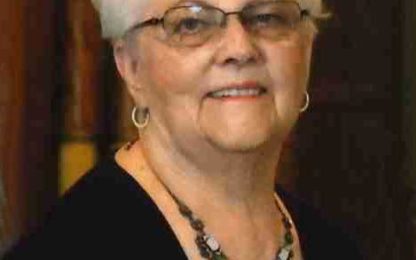 Visitation will be on Friday, February 7, from 4:00 pm to 7:00 pm at the Sturm Funeral Home, Lamberton Chapel and will continue on Saturday from 10:00 am until 11:00 am at the Our Savior’s Lutheran Church in Lamberton.

Service will be held at the Our Savior’s Lutheran Church on Saturday at 11:00 am.

The clergy will be Todd Mathison. Interment will be at the Lamberton Cemetery

Beverly Joan Willhite was born to Roger and Ruby (Renberg) Frank in Tracy, MN on May 16, 1940. She grew up on a farm west of Lamberton and attended and graduated from Lamberton High School in 1958. Bev moved to the cities to attend business school and to work. On June 18, 1960, she was united in marriage to Melvin Willhite in Lamberton and they moved to a farm near Lucan. In 1968, the couple moved to a farm near Lamberton. Bev worked as a TMA at Valley View Manor and as a Home Health Aid for Redwood County Public Health retiring in 2005. Melvin and Bev moved into Lamberton 5 years ago after retiring from farming. She was a former member of Sharon Lutheran Church and was currently a member of Our Savior’s Lutheran Church where she was involved in the circle, choir, and women’s group. For many years Bev was involved with 4-H, Forget Me Nots Extension group, and various card clubs. Bev enjoyed flower and vegetable gardening, baking and cooking, needlework, bowling, and was an avid Twins fan. Family was very important to Bev; she loved to spend time with them, care for them, and attend their sporting events and activities.