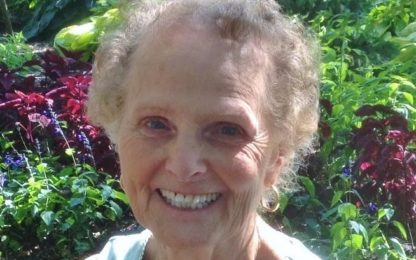 Barbara Duehn, age 87, of Hector died on Friday, December 18, 2020 at RenVilla Nursing Home in Renville. Private services will be held at a later date with burial in the United Methodist Church of Hope Cemetery in Osceola Township, north of Hector. Arrangements are with Dirks-Blem Funeral Service of Olivia.

Barbara Jean Dahl was born to Robert Stanford Dahl and Bernice Lucille Wederath at their home in Bird Island, MN, on February 8, 1933.She attended and graduated from Olivia Public School in 1951.Barbara attended the Zion Evangelical United Brethren Church in Olivia, was baptized there, and married Delton Carl Duehn there on September 3,1952.  The marriage was blessed with five children:LaJean, Joy, David, Timothy, and Theodore. Barbara was an excellent homemaker.  She loved to entertain and made everyone feel welcome in her home.  A woman of many talents: seamstress, gardener, excellent cook, caterer, canner, dog trainer, writer, fisherman, singer, artist, lifelong student and teacher.  She enjoyed traveling and meeting people.  It was not uncommon for her to strike up a conversation with someone she’d meet along the way and correspond with them for years. She loved vegetable and flower gardening.  She was an active member of the American Hemerocallis Society.  Delton built her a greenhouse so she could pursue her interest in developing her own varieties of daylilies.  She traveled to many conventions across the U.S. and made lifelong friends through this organization. Barbara was especially interested in Hebrew and Greek studies.  She enjoyed getting into the meat of the Bible. Her favorite topic being Jesus.  She loved attending and teaching bible studies.  Barbara had a love for children, but teenagers held a special place in her heart.  A youth counselor and teen Sunday school teacher her whole life, no topic was off limits.  Her students were always directed back to the Bible for answers to any of life’s situations.  She knew how to throw a party for young people; games, pizzas, camping and canoe trips to the BWCA, lock-ins, and youth rallies.  She loved it all.  Delton described her as, ‘the life of the party’. As a teen, Barbara worked in the Olivia Theater.  News of the war (WWII) was broadcast before each movie.  It was a way to feel connected to her dad, who was stationed in Europe.  She worked at Renville County Hospital as a candy striper.  She also volunteered at the Renville County Day Activity Center, one of the first programs in the area for challenged adults.  Barb worked at the Renville County Fair foods exhibit for over 25 years, was a volunteer driver for Heartland Express, and an election judge. Other than a fantastic homemaker, mother and grandma, learning, teaching and talking about Jesus was her main interest.  Stressing the importance that each person make a personal decision to ask Jesus to be his/her Lord and Savior to spend eternity in Heaven was her mission in life.