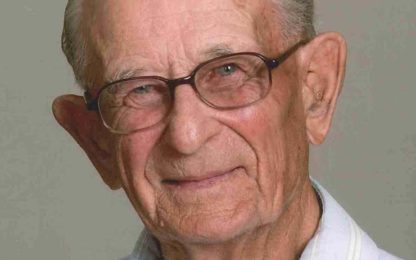 Service will be held at the church on Monday at 10:30 am.

The clergy will be Pastor Dan Larsen. Interment will be at the Zion Lutheran Cemetery in Springfield.

William (Bill) Clarence Haseleu was born January 21, 1929 in Springfield, MN to parents William Haseleu and Leona (Wendt) Haseleu. He was baptized and confirmed at St. Paul Lutheran Church and graduated High School in Springfield, MN.  On January 30, 1949 Bill was united in marriage to Leola Friedrich at St. John’s Lutheran Church in Morgan, MN. They made their home on a farm near Clements where together they farmed and raised hogs for 50 years. Along with farming, Bill worked at the Steinke Seidl Lumber Yard in Morgan until starting his own construction company. He took great pride in the many homes he built over 15 years. After retiring from farming Bill continued to be active in helping with farming in the spring & fall. Trips to town for morning coffee & cards with friends were important to him. He greatly enjoyed watching his grandchildren and great grandchildren in their many sporting events.  Bill was genuinely proud of being a U.S citizen and having served in the Army during the Korean War. He was a very involved member of the VFW post in Morgan and remained a lifetime member. He was an avid Boston Red Sox fan following the team since high school days. The Green Bay Packers also ranked high on his list of teams to watch.