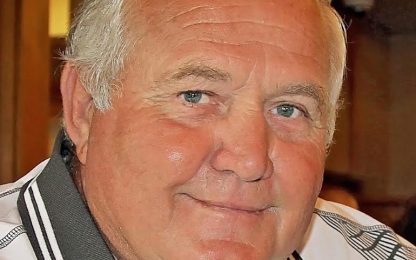 Walter W. Fennern Jr., age 80 of Wabasso, passed away Thursday, November 19, 2020 at Park Nicollet Methodist Hospital in St. Louis Park.  A Celebration of Life will be held from 11:00 a.m. to 2:00 p.m. Sunday, May 16 at the Wabasso Community Center.  Interment will follow in the Trinity Lutheran Cemetery in Willow Lake Township. Online condolences may be sent at www.stephensfuneralservice.com.  Stephens Funeral Service – Redwood Valley Funeral Home is assisting the family with arrangements.

Walter Fennern, Jr. was born February 13, 1940 and raised near Wabasso, Minnesota on the family farm to Walter and Lillian Fennern. He was baptized and confirmed at Trinity Lutheran Church in Willow Lake Township. Jr graduated from Wabasso High School in 1959.  Shortly after, he moved to California for a brief time, where he worked as a welder, and then moved to Minneapolis where he worked at Lake Street Rambler as a parts runner. That is also where he met Connie Wenzel and they were united in marriage on September 25, 1964. Shortly after, they moved back to Wabasso, where he worked on the farm with his dad. After the passing of his parents, they moved out to the family farm. Farming was one of his many loves. He was a farmer through and through and continued that until his death. Jr and Connie were married for 29 years, had 3 beautiful children and an exceptionally good life together until Connie’s passing in May of 1995.  After 16 years, he was blessed once again when he met, fell in love, and was then united in marriage to Florence (Petsinger) on March 1, 2013. They only shared 7 ½ short years, but they were full, happy, and incredibly special years together that will always be cherished. They were able to spend several of those years wintering in Yuma and the rest of their time on the farm. Jr was involved in many activities throughout his life, anything and everything that would bring him together with friends, and everyone was his friend the minute he met them. In his younger years, he enjoyed playing Santa Claus. He was highly active in the Wabasso Lions Club. He spent many, many years coaching Jay Cee’s wrestling. He also helped at high school football games. He LOVED kids of all ages! And the kids LOVED him! He loved working with them, teaching them and just spending time with them, but mostly he loved teasing them. Jr was such a sweet man, full of personality, gentle and so giving. He was always the first one to volunteer to help anyone out at any time. He had the biggest heart! And he loved big with that heart. That love started and ended with his family. He loved spending time with his wife, his kids, his 5 beautiful granddaughters and his siblings, nieces, and nephews. He recently was blessed with a new great grandson, Jace, who stole a huge piece of his heart and he lovingly nicknamed “Little Jake”. He was also excited to have another great grandson on the way, who would have filled his heart even more. If you knew Jr, you knew he was either out hunting, gone fishing, having coffee in the morning with his Roadhouse crew, playing cards or heading uptown for a drink with his buddies whenever he got the call. He loved his trips to Canada throughout the summer and would jump at the chance to go fishing. He enjoyed many trips to Colorado elk hunting and South Dakota for some pheasant hunting and fishing on the river. He had a full life and he lived it well.

Jr is survived by his wife Florence of Wabasso; daughter Jennifer (Troy) Dudgeon of Lakeville; son Erick (Autumn) Fennern of Olivia; granddaughters: Sierra (Trent) Hinrichs, Lexi (Sam) Kurtz, Taylor Fennern, Morgan Fennern and Kaylee Fennern; great grandson Jace Hinrichs; sister Clarice (Elton) Koosmann; brother Gerald (Marion) Fennern; and an extended family of stepchildren, step grandchildren and many step great grandchildren, who lovingly referred to him as their “Papa Jr”. He was preceded in death by his parents, his wife Connie Fennern, his son Scottie Fennern, 2 sisters, 3 brothers and in-laws. “When Christ shall come with shout of acclamation. And lead me home, what joy shall fill my heart. Then I shall bow with humble adoration. And then proclaim, my God, how great Thou art.”