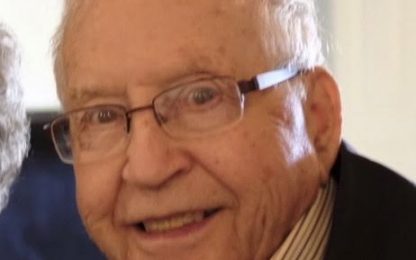 The funeral service for Walter “Pally” Werner, 92, of Golden Valley, formerly of rural Echo, will be at 11:00 a.m. on Friday, May 28, 2021, at Peace Lutheran Church in Echo. Visitation will be held on Thursday, May 27, from 4:00 until 7:00 p.m. at Sunset Funeral Home in Echo. Visitation will continue one hour prior to the service at the church. Interment with military honors will follow the service at the Echo Cemetery.

Walter “Pally” Julius Werner, Jr. was born on October 15, 1928, in Haymond, Kentucky, to Walter Sr. and Kathryn (Perry) Werner. As a child, he moved with his family to Illinois and West Virginia, before settling in Wood Lake. At the age of seven, Pally chose to stay with his grandmother in Wood Lake rather than move again. He and a number of cousins were all raised by their single grandmother. Pally graduated from Wood Lake High School in 1947. He worked as a carpenter for a few years before enlisting in the US Army in February 1951. Pally was stationed in Korea, where he worked as a teletype operator, until his honorable discharge in February 1953. After returning home, he worked as an assistant manager at the Wood Lake Creamery. He was united in marriage to Janet Remmele on September 12, 1954, at Peace Lutheran Church in Echo. In 1959, Pally left the creamery and began working with Janet’s father Baldy on their farm. Pally and Janet made their home on a house next to the Remmele family farm in Posen Township. They lived on the farm until 2016, when they moved into the Belview Townhomes. In November 2020, they moved to Meadow Ridge Assisted Living in Golden Valley.

In his younger years, Pally enjoyed playing baseball. He pitched in Korea, played on the Wood Lake town team, and was even scouted by the Red Sox before hurting his shoulder. Pally had two gardens that he enjoyed caring for, often going out three times a day to check on them. He had a soft spot for German Shepherds, having at least three named Buck throughout his life. He enjoyed singing, and composed songs for major events for many family and friends. His family was very important to him, and he especially enjoyed time spent with his grandchildren. Pally and Janet traveled all around the United States, first driving, and later participating in bus tours. Many of their trips involved history, since Pally was a huge history buff. He was involved in the community as a lifetime member of the American Legion, first in Wood Lake, then in Echo. He also served on the church council and sang in the choir at Peace Lutheran, and he was a longtime member of the Yellow Medicine Soil and Water Conservation district. He enjoyed telling stories and jokes. Pally was a kind man who was quiet about his good works, not boastful or looking for praise.