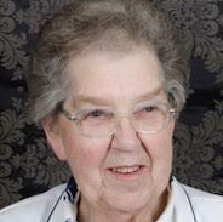 Veronica Triplett, age 85, of Danube, MN, died Tuesday, September 22, 2020 at the RenVilla Nursing Home in Renville. Mass of Christian Burial will be Saturday, October 17th at 10:30 at Holy Redeemer Catholic Church in Renville with Rev. Joe Steinbeisser as celebrant. Visitation will be one hour prior to the service. Burial was in Fairview Cemetery at Renville. Arrangements are with Dirks-Blem Funeral Service of Olivia.

Veronica Emma Triplett was born March 15, 1935 at Graceville, MN, to Jacob and Veronica (Cordie) Schmitz. She grew up at Dumont and attended St. Peter’s Catholic School there. After this Veronica helped on the family farm and also worked at the Graceville Hospital doing cooking and cleaning. Veronica married Earl Triplett on March 4, 1957. The family made their home in Danube and besides being a homemaker she did daycare for many years. She was a member of Holy Redeemer Catholic Church in Renville. Veronica enjoyed cooking and baking and is fondly remembered for whenever family was coming over she always made their favorite meal.  She also enjoyed scrapbooking, decorating her home for the holidays, and spending time with her family.