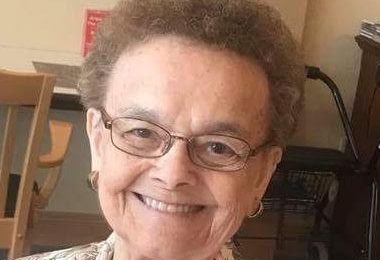 Veronica Ann Roschild, age 87, of Renville passed away at the RenVilla Nursing Home on March 20, 2020.  A private family service will be held at St. John’s Lutheran Church in Renville with Pastor Michael Kuschel officiating.  Burial will be in Fairview Cemetery in Renville. MN.  Arrangements are with Dirks-Blem Funeral Home in Renville, MN.

Veronica was born on July 21, 1932, at home to Frank and Anna (Herdina) Kubesh.  She grew up in Olivia and attended country school through the 8th grade.  Throughout her life she worked at various job including Fingerhut, Gateway (Chatterbox) Café, Earl and Betty’s Café, and Jackpot Junction.  Veronica married Maynard Roschild on September 16, 1950.  They would have celebrated their 70th wedding anniversary this September.  They lived in rural Renville and moved to the city of Renville in 1972.  She was a member of St. John’s Lutheran Church in Renville and participated in the Dorcas Society for many years.   They were blessed with five boys.

Veronica enjoyed watching and listening to the Twins and Vikings.  She also enjoyed cooking, baking, gardening, and canning.  She loved to go camping, fishing, and spending time with her family.  She very much appreciated that her family was close by her during her final journey.

May she rest in peace!