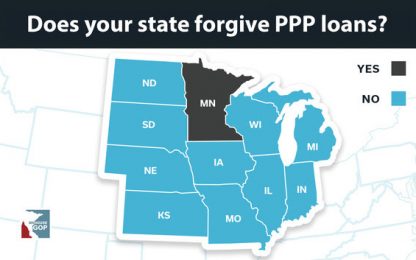 Last year, many small business owners accepted a federal loan in order to survive the pandemic. Now that decision could cost them tens of thousands of dollars in unexpected tax increases. With tax bills due in the coming weeks, State Representative Paul Torkelson of Hanska said the legislature must act quickly to prevent more financial devastation on local employers.

Torkelson said, “Governor Walz forced many of these business owners into closure, and they accepted the federal loan in order to stay afloat. Now state government wants to tax this revenue as income, which would further devastate local businesses that continue to struggle.”

Torkelson said impacted business owners who accepted Payroll Protection Program (PPP) loans are being unnecessarily targeted by state government. If businesses used those PPP funds to pay wages, rent, or other criteria approved by the federal government, the loans were ultimately forgiven and were free from federal taxation.

But Minnesota has not conformed its tax code to match the federal law, and in doing so, is the only state in the Upper Midwest that has yet to exempt forgiven PPP loan income from state income taxes.