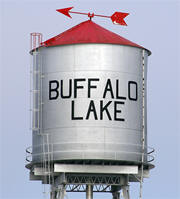 A Stewart teen was injured Saturday in a crash near Buffalo Lake.

Responders on scene found a 2002 Volkswagen Jetta driven by Caleb Fox, 17 of Stewart. The vehicle had struck two utility poles and was found partially off the ground leaning against one of the poles. Fox had been able to free himself from the vehicle, and was found walking towards a residence. He was transported by ambulance to Hutchinson Health with serious injuries.

Fox indicated he had swerved to miss an animal in the roadway and entered the ditch. He continued driving in the ditch while attempting to get back onto the roadway. Fox struck a utility pole, causing the vehicle to rollover and strike a second pole. The vehicle is considered a total loss. Fox was wearing his seatbelt, and his airbags did deploy.

This crash remain under investigation.