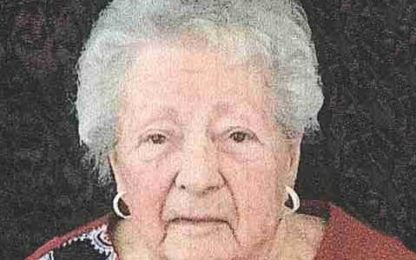 Due to Covid-19, there will be a private family service held at a later date.

Shirley Ann Flaig was born November 2, 1928 to parents Ralph B. and Estella (Schouweiler) Flaig at their family farm in Charlestown Township, Redwood County. She was baptized and confirmed at St. Thomas Catholic Church in Sanborn. Shirley attended Sanborn Public School and graduated Salutatorian of the graduating class of 1946. After graduation she worked as a bookkeeper at the Sanborn Farmer’s Elevator. Shirley was united in marriage to Robert P. Simonson on February 9, 1948 at St. Thomas in Sanborn. They made their home on a farm east of Sanborn where they raised their four children, milked cows, and farmed. Shirley took great pride in being a mother, homemaker, and keeping the home fires burning there on the farm for over 60 years. In 2008, Shirley and Bob moved to The Maples in Springfield where they enjoyed their apartment living for the next four years. In 2012, they both became residents of St. John Lutheran Home. Shirley was a 47 year member of the Sanborn Legion Auxiliary, a member of St. Thomas CCW and later an honorary member of St. Raphael CCW in Springfield. One of the things that brought great joy to Shirley was picking up a good book and not putting it down until she finished it. Her love of reading started early in childhood but sadly came to a stop when she was diagnosed with macular degeneration. Her favorite book was “Gone With The Wind” and she read it numerous times over the years. She could tell you which outfit Scarlet wore for every scene. Shirley was a wonderful baker and cook and loved preparing meals for her family and the many hunters that came to stay at their farm over the years. She was known for her famous baked beans at family picnics and her delicious anise cookies that were a much anticipated treat at Christmas time. The grandchildren always knew there would be treats in the candy dish and cookies in the cookie jar at Grandma Simonson’s house.