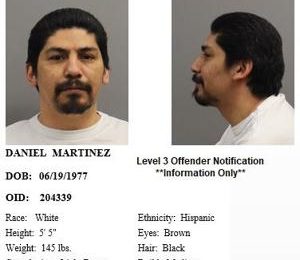 A convicted Level 3 sex offender has been released from jail and is currently dwelling in Willmar.

Daniel Martinez, age 42, is listed as homeless but is required, by law, to check in with law enforcement on a frequent basis. Martinez has served his sentence for sexually molesting a woman and a child that he knew, and was released from jail on Sunday.

Willmar Police Chief Jim Felt says the department is working to ensure Martinez is compliant with city ordinance regarding restrictions on where registered offenders may or may not live.

For more information, a photo and a physical description of Martinez go to the Willmar Police Department Facebook page.