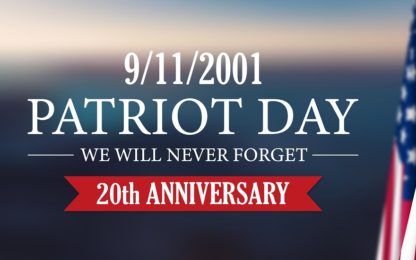 On Saturday, Sept. 11, Senator Gary Dahms of Redwood Falls will deliver remarks at a remembrance of the 20th anniversary of the September 11th terrorist attacks. He wants to share with you the following condensed version of his remarks for those who are unable to attend the ceremony in Marshall

It is important we never forget the horrific attacks of September 11, 2001. The legacy of those who died that day must endure forever. I want to especially thank those peace officers, firefighters, paramedics, and others who ran towards the buildings to save lives. We can never forget their bravery and heroism.

We can never forget that day and we must pass along the memory to future generations. Children in schools today were born years after the events of 9/11. Many of our soldiers who are serving overseas today were born after 9/11. We owe it to the many survivors and victims of that horrific attack to honor and remember their memories.

Like so many of you, I remember clearly what I was doing when I first heard about the attacks. I was traveling from my insurance office when I heard the news of a plane crashing into a building in New York City. The initial feeling of confusion was replaced by shock when I heard another building had been struck. Then the Pentagon was hit, and it was unclear how many more attacks would be coming. I remember trying to digest the horrific news.

Our country and the world forever changed that day. Our freedom and our liberties were challenged by a group of terrorists thousands of miles away. Our sense of safety was forever changed, and we have had to be vigilant of terrorism ever since.

September 11 was a tragedy I hope the world never needs to experience again. However, as often happens in our history, this great tragedy did bring out some of the best in humanity. From the people who were just there – working at the World Trade Center or tragically on a hijacked plane. There were countless stories of small hope: someone helping a disabled colleague manage the stairs to evacuate. Sharing a cell phone to say good bye one last time before their plane was crashed.  The volunteers who poured out to help with recovery efforts, donate blood for injured victims, and the heroic service of the first responders who searched in the dark of night for survivors.

Every community has stories of the shared compassion and connection in the weeks after 9/11. The way our streets were lined with the American flag, and people held their loved ones just a little closer.

We experienced a great sense of patriotism that unfortunately has yet to be matched since. We rallied together in the face of a common enemy that was set to destroy the values our country stands for.

I hope this 20th anniversary can help bring us together as a country again. Hopefully, we can renew our sense of patriotism and love for our fellow Americans. Let us never forget that day that changed all our lives forever.