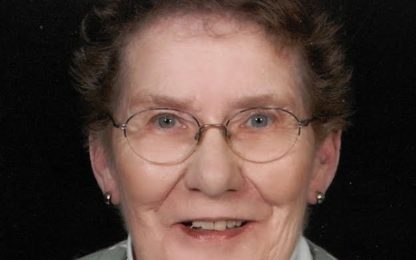 Ruth Verna Dreier, the daughter of Edwin Otto and Alice Lena (Ruemke) Wandersee was born on October 15, 1935. She graduated from St. Paul’s Lutheran School in New Ulm, Minnesota in 1953. After graduation she attended nursing school in Rochester, Minnesota. She married the love of her life, Lee Von Dreier on June 11, 1955 at St. Paul’s Lutheran Church in New Ulm, Minnesota. The couple lived in Gaylord, Minnesota, for a short time, moving to Mankato in 1958 and finally to Redwood Falls in 1960. To this union three children were born, Randy Lee Dreier, Michael Wayne Dreier and Pamela Jo (Dreier) Schweiss. Ruth retired from nursing at the Redwood Falls City Hospital in 1995.

Ruth enjoyed crafting, painting, reading, her flower gardens, motorcycling and traveling. She enjoyed going for rides in the car and most of all her grandchildren and great-grandchildren.

Ruth was preceded in death by her parents, Edwin and Alice Wandersee and her husband, Lee, her sister, Marion Klaseus, brothers-in-law, Hilary Dreier, Erlin Dreier and sister in law, Joanne Dreier.