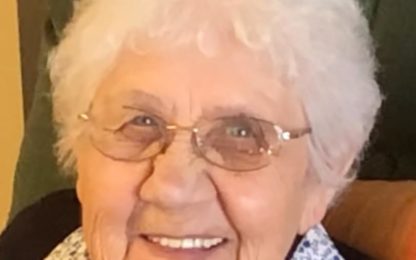 Rosetta Thelma Woodbury, age 90 of Norfolk, NE, formerly of Worthington, passed away Wednesday, November 11, 2020 at Heritage of BelAir Nursing Home in Norfolk. Memorial Services will be held at a later date. Online condolences may be sent at www.stephensfuneralservice.com. Stephens Funeral Service – Redwood Valley Funeral Home is assisting the family with arrangements.

Rosetta Thelma (Sanow) Woodbury was born March 2, 1930 to Frank and Fanny (Aljets) Sanow in Chandler, Minnesota. She was baptized at Trinity Lutheran Church and confirmed at St. Peter Evangelical Lutheran Church in Chandler. Rosie attended school in Chandler until the third grade; she then moved with her parents to Garvin in 1940. There she attended District 52 until eighth grade. After finishing school, Rosie worked as a nanny and housekeeper for different families. On May 17, 1957, she married Loren Woodbury in Flandreau, SD. Rosie worked for Tony Downs in Tracy and the Marshall Produce Company until 1962. The couple then moved to Worthington. There, Rosie worked at Campbell Soup Company for 25 years, before retiring in 1988. She and Loren later moved to Echo, where she worked for Hoffco Inc. until 1998. They both retired and moved to Kohles Acres in Crofton, NE in September of 2002. Loren passed away on January 4, 2003 after 45 years of marriage. Rosie enjoyed tending to her beautiful flower garden. You could often find her cooking and baking for everyone she loved. She enjoyed embroidery and in most recent years making quits for her children, grandchildren and great grandchildren. Rosie especially loved spending time with her family and many friends.