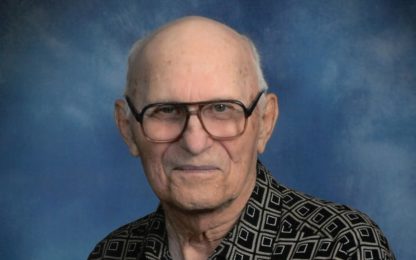 Ronald Hoffman, age 90 of Walnut Grove, passed away peacefully Monday, September 7, 2020 at Westbrook Good Samaritan.  Funeral Services will be held at 10:30 a.m. Saturday, September 12 at Zion Lutheran Church in Tracy.  The service will be broadcasted via Facebook Live on the Stephens Funeral Service Facebook page.  Visiinstation will be 4:00-7:00 p.m. Friday at Walnut Grove Funeral Home.  Visitation will continue one hour prior to the service at church.  Interment will be in the Sanborn City Cemetery.  Due to the current Covid-19 restrictions, GUESTS WILL BE REQUIRED TO WEAR A MASK and practice social distancing guidelines. A 50% indoor occupancy restriction will be maintained. Facebook link may be found and online condolences may be sent at www.stephensfuneralservice.com.  Stephens Funeral Service – Walnut Grove Funeral Home is assisting the family with arrangements.

Ronald Hoffman was born June 13,1930 to Herman and Augusta (Wagner) Hoffman in Willow Lake Township, Redwood County, Minnesota.  He was baptized and confirmed at Trinity Lutheran Church in Willow Lake Township.  Ron attended country school, and played baseball as a young man in the 1940’s.  In 1947, Ron started farming with his brother.  On August 19, 1951, he was united in marriage to Colleen Dietz at Trinity Lutheran Church in Willow Lake Township.  He was drafted into the US Army on September 15, 1951 and was deployed to Korea in March 1952.  Ron returned to Minnesota in May 1953.  Ron and Colleen lived on his parent’s farm in a trailer house until 1955.  The couple then made their home on the farm north of Walnut Grove where they raised their family.   After Colleen passed in 2004, Ron continued living on the farm until 2013 at which time he moved to Country View.  Ron was a member of the Walnut Grove American Legion for over 60 years, and was also a member of the Disabled American Veterans.  Ron was a member of Zion Lutheran Church in Tracy and served on the church board, and also served on his township board for 25 years.  He enjoyed going to town and playing Pinochle with his friends over a cup of coffee.  He also enjoyed hunting and fishing.  Ron also loved to garden while living out on the farm, but most of all enjoyed sharing what he grew with others in the community.  Ron also loved spending time with his children and grandchildren.  Ron will always be remembered for his quick wit and wonderful sense of humor.