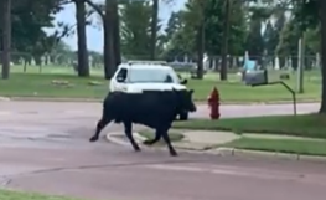 A bovine of undetermined gender that tumbled out of a trailer near New Ulm on Sunday came to an unfortunate end.

New Ulm Police said they responded to the area of Jefferson St and Highway 14 at 3:30 p.m to wrangle a rogue cow that was running freely about the city.  Sergeant Aaron Lewondowski says the animal fell out of a trailer west of New Ulm after something broke on the trailer’s latch.

Police tracked the animal for about an hour, trying to coax it back into the trailer.  Unfortunately, the bovine wasn’t cooperative and eventually became a public safety concern.

Police say they shot and killed the animal near the area of Franklin St and Highway 14, because the chase had landed near a park where there where children and active baseball games.

The beef was shot in a business parking lot, so it never became a traffic hazard, according to police.

The animal’s owner was present during the shooting and removed the corpse from the lot.