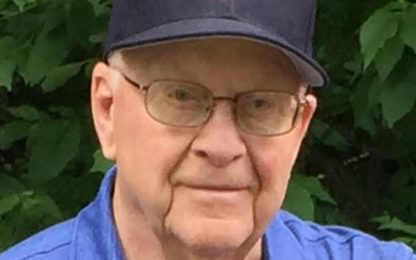 Roger M. Dahl, 91, of Sacred Heart, died Monday, September 14th at his home. His funeral service will be 2:00 pm, Saturday, September 19th, at Our Savior’s Lutheran Church in Sacred Heart. Visitation will be one hour prior to his service at the church.  A private family graveside service will be at the church cemetery.  Arrangements are with Harvey Anderson Funeral Home in Willmar. www.hafh.org

Roger Merl Dahl was born June 13, 1929, at Seaforth, the son of Carl and Helena (Froelich) Dahl.  He was baptized and later confirmed his faith at St. Paul Lutheran Church in Seaforth.  He received his schooling in Wabasso Public Schools.  Roger served in the Army National Guard from 1950-1951.  On June 21, 1958, Roger was united in marriage to Ranee Zimmer at Echo.  Following their marriage they lived in Sacred Heart, where Roger worked as a punch press operator for Warner Manufacturing, retiring in 1996, after 44 years of employment.

In his early years he enjoyed summer vacations at the lake, dancing, playing cards, fishing and traveling. Roger enjoyed shaking dice at Kathy’s Place and taking drives by the Minnesota River.  He also enjoyed listening to country music, watching his friends line dance at Jackpot, as well as keeping up with the Vikings, Twins, and Sacred Heart Saints.  Most of all he loved spending time with family, especially seeing his grandchildren and great-grandchildren.

He was preceded in death by his parents; and his siblings: Ella Leuk, Ethel Davis, Vivian Burris, Verna Romness, Clifford Dahl, and Orville Dahl (in infancy).