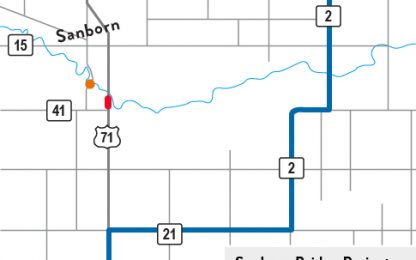 One way you can tell it’s spring: road construction projects are starting up again. Minnesota Department of Transportation crews began removing trees near U.S. Highway 71 in Sanborn Wednesday as the first steps for the bridge replacement project over the Cottonwood River, which gets underway in April.

Work will take place off the roadway; however, drivers are asked to use caution and watch for vehicles at the work site. The city bridge (shown in orange on map) will also be closed during the project and a detour will be in place.

MNDoT’s plans call to replace the bridge over the Cottonwood River south of Sanborn. The bridge was built in 1931 and is near the end of its useful life. The new bridge will be wider than the existing bridge with 12-foot driving lanes and 10-foot shoulders. Minor work on the approaches will also take place to improve drainage on the bridge, including the reshaping of the ditches and some stream stabilization, and a new guardrail will also be installed.