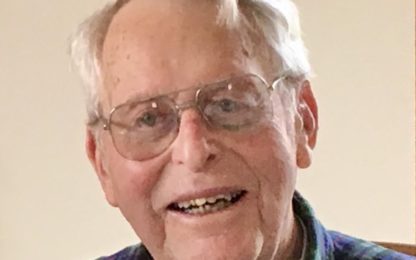 On September 24, 2020 Richard (Jake) Fredrick Jacobs, age 95, determined that his new residence was heaven. He joins the love of his life Ruth who has been saving a spot for him since 2014. A Mass of Christian Burial for Richard will be held Friday, October 2 at 9 a.m. at St Mary’s Catholic Church in Bird Island with concelebrants Father George Schmit and Father Phil Schotzko.  There will be an honor guard by Knights of Columbus and military rites outside the church after the mass.

To keep everyone safe during these times, the Mass congregation is strictly limited to 250 attendees with facial covering and distancing. In the event the seating maximum of 250 is reached, we graciously ask that priority be given to immediate and extended family members. Immediately after the Mass, there will be a drive-by celebration of Richard on the street by his home, 810 Cherry Ave, Bird Island MN.  Richard requests and appreciates any donations be made to St Mary’s School or St Mary’s Church of Bird Island.  The family intends to host a celebration of life at a future date when it is safe to gather.

Richard was born in Bird Island Minnesota on March 20, 1925 the baby of the family of Margaret and Mathew Jacobs.  Older siblings were Dorothy, Sylvester, Lucille, and Marion.  Richard proudly called Bird Island home his entire life. He graduated from St Mary’s High School. At the age of 19 he was drafted into the SeeBees, a construction branch of the Navy during World War II and was stationed in Okinawa Japan.   After the war ended Jake met Ruth Ann Hagen, Registered Nurse and graduate of St Catherine’s college.  In his words, he was “wowed”. Persistence paid off and Ruth said “Yes” to his third proposal of marriage.  They were married on February 3, 1951.  As the babies began showing up, Richard decided at the age of 30 to change his profession from construction to farming in order to have more time with the family.

Their secret to raising 11 children on a farm at that time – there were always plenty of chores for Mike (Judy), Ann, Tom (Sheila), Phil (Mary), Jean (Paul), Tony (Laurie), Maggie, Daniel, Angie (Ian), Sarah (David), Betsy (Sam).  But Richard made sure to incorporate plenty of kid fun – playing ball with us in the yard, taking us to Kandiyohi Lake for a swim, tobogganing adventures at Fort Ridgely or camper road trips to Black Hills and Lake Superior and beyond and a full week at a lake cabin.

Along with Jerry Jungers and brother Sy, Richard was one of the founding farmers of the original Bird Island Sugar Company in 1964 growing for the Chaska Beet plant. Richard continued as a founding shareholder and board member for the Southern Minnesota Sugar Beet Cooperative in 1973 with 1975 as the first year of production. But even while building the farming operation and making it through some very lean years, he always made time for community service.  A few of the many areas he volunteered with included the School Board, St Mary’s Reunion committee, Lions Club, Knights of Columbus, and many other farming related boards. Into his 90’s Jake was still helping with ticket sales at the County Fair, Polka Fest and the Lions Club.  Ruth and Richard did a fair amount of globe-trotting and having a family connection in England through daughter Angie and husband Ian, kept them commuting over the pond on a regular basis. Always ready to cut a rug, Richard started dancing with his kids in the living room as soon as they could walk.  If there was a dance at the Island Ballroom you could count on seeing Richard on the floor until closing. Richard and Ruth loved the golf and fishing trips with friends.  Richard thoroughly enjoyed the game and even more, the comradery of golf, playing with his cadre of “Good Old Boys”. For many years his daily routine of coffee with the girls at Athmann’s Inn was a great way to start his mornings. Richard also enjoyed his Bridge card playing group at the Bird Island Cultural Center.  Richard a farmer to the end, was able to help sons Tom, Daniel, Mike and grandson Sam with harvest into his 90’s. Every meal blessing concluded with “…thank the loving hands that prepared this meal, and the farmers who grew it.”

Richard is survived by 10 of his 11 children, losing his daughter Maggie in 1994; 31 grandchildren, losing baby Matthew and Alex in 2014; 6 great grandchildren; Ruth’s amazing sister Lois and cousin Gloria; a warm, attentive, loving mob of nieces and nephews; and innumerable friends and fans.

About the only euphemistic profanity we ever heard Richard say was “dadgummit”. Dear Richard, we know you were ready to reap the rewards of a rich, full life well-lived, but dadgummit, we know how much we will miss your support, humor, love and being the centrifugal force for the sprawling Jacobs Family and community network you created.