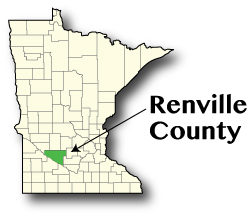 Renville County Emergency Management Director Mike Hennen says last weekend’s storms did at least $154,000 in damages to public infrastructure. Hennen says he expects that number to rise by at least $100,000 after the waters go down, and they can inspect the ditch system further. He says on Saturday night and Sunday morning, the southeast part of Renville County got soaked.

Hennen says his office has only dealt with public infrastructure and does not know the extend of damage to crops. He says The Renville County Board Tuesday declared it a disaster area. This is Renville County’s second disaster declaration in the last 30 days. In late June they made a similar declaration after a nearby area of the county was also hit by a huge rain event.