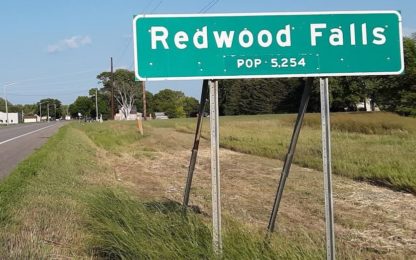 Last Thursday, data from the 2020 census was officially released. While much of it is still being analyzed, one number stands out: 5,102. That is now the official population of Redwood Falls, at least according to the U.S. Census Bureau.
And that huge sigh of relief you might have heard was from City of Redwood Falls officials. For the past 10 years, Redwood’s population has officially been 5,254, and there were fears the number could drop under 5,000 after this past census.

It’s not just a matter of civic pride. Dropping below 5,000 people could have cost the city of Redwood Falls hundreds of thousands of dollars in state and federal grant and loan opportunities every year for the next decade.

Marty Seifert, of the Coalition of Greater Minnesota Cities, told KLGR why it is so important for the city’s population to stay above that magic 5,000 number:

Seifert pointed out that a large percentage of the City of Redwood Falls’ budget comes from state grants determined by population:

Even if the city’s population fluctuates from year to year, Redwood Falls City Administrator Keith Muetzel said the 5,102 number is locked in until the next census results are released in 2031.