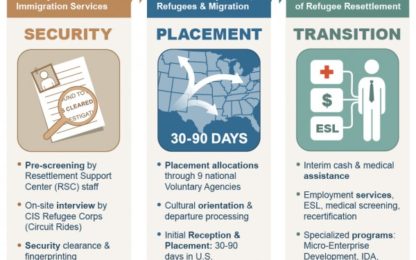 Last month, the Redwood County Commissioners voted to consent to continue allowing the federal government to settle legal refugees from other nations in Redwood County. It was all part of President Trump’s excutive order granting counties to have some say in the matter.

The vote ended up catching many Redwood County residents by surprise, and the strength of the reaction to the vote, both pro and con, startled many, not least of which the county commissioners themselves.

One thing that has created division in Minnesota is that on Dec. 13, Governor Tim Walz explicitly rejected President Trump’s executive order. Walz instead gave his formal consent as governor, speaking for the entire state, to keep allowing refugees to settle in Minnesota in defiance of what the president’s executive order stated.

In response to the issue, a number of area residents have, on their own, organized a refugee resettlement program informational meeting. It’s set for the Redwood Area Community Center this coming Thursday from 6:30 until 9:30.

Roger Baumann, of Wabasso, one of the organizers, explained why the informational meeting was organized:

While the informational meeting will feature some speakers who believe too much refugee resettlement harms society, Baumann stressed he and the other organizers have gone out of their way to have the other side give its views, too. Representives from United Community Action Partnership and Southwest Health and Human Services have been invited to speak as well.

It is important to note this meeting is not being sponsored by any government agency. It has been arranged entirely by volunteers in Redwood County who believe the public needs to be better informed about what the actual issues are.

After the information is shared, there will be a question and answer session, and everyone is invited.