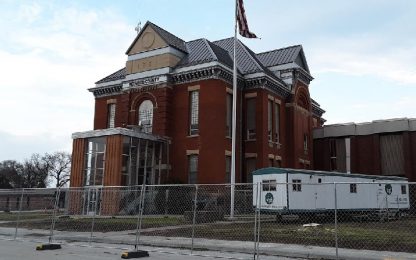 Redwood County, and the City of Redwood Falls, agreed on Tuesday how they’re going to divide up responsibilities for the upcoming new replacement for the courthouse.

The new structure, which will replace the current Redwood County Courthouse, faces a few legal hurdles about jurisdiction. The new Redwood County Justice Center is 100 percent the responsibility of the county. However, the streets around it — the site of the current courthouse — are 100 percent owned by the city.

Furthermore, plans call for the county to build a tunnel connecting the Sheriff’s office with the new courthouse facility for prisoner transfers with greater security. However, the city owns the street and infrastructure the tunnel will have to be constructed under and around. In 2019, the City of Redwood Falls reconstructed about three-fourths of the square streets around the courthouse, but left the final one-fourth unfinished at the County’s request.

On Tuesday, the Redwood Falls City Council approved an agreement defining the city’s and county’s roles in the upcoming project, where they overlap.

Redwood County will be 100 percent responsible for the design, construction, and expense of all the *city’s* improvements required for the project. The county will also be responsible for all the standard plan reviews and building permit fees. The City of Redwood Falls will make a lump sum payment of $50,000 to the county to offset a portion of the infrastructure costs.