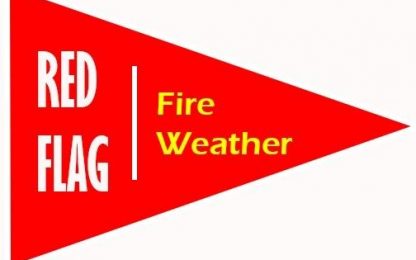 With extreme fire risk conditions across much of Minnesota, the National Weather Service has issued a Red Flag Warning that encompasses the entire KLGR-area until Tuesday afternoon. A Red Flag Warning means the area is experiencing critical weather conditions that are ideal for wildfire.

Do not burn while the Red Flag Warning remains in effect and check any burning done recently to ensure the fire is out. Any spark could become a wildfire under Red Flag conditions.

The Red Flag Warning expires at 1 a.m. on Tuesday.

UPDATE: Effective Monday March 29, 2021 at 12:00 PM until further notice, the Brown County Sheriff’s Office has issued a BURNING BAN for all of Brown County.

Recreational camp fires must be contained in a ring of either rock, cement, brick or metal, must not be closer than 25 feet to any structure and be attended to.

The Brown County Sheriff’s Office and the Brown County Planning and Zoning Office want to also remind residents that the burning of garbage is illegal.