Pickup Destroyed By Fire On Highway 14 near Courtland Saturday 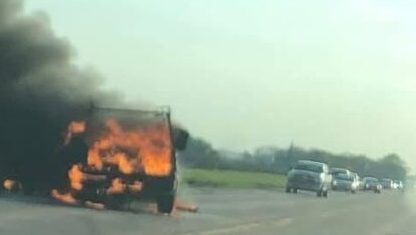 A pickup traveling on Highway 14 west of Mankato was destroyed when it erupted into flames over the weekend.

Courtland Fire Chief Dave Ubel said his department was called to the scene between Courtland and Nicollet at 6:48 p.m. Saturday.

Ubel said the driver of the 2011 F-250 was alerted to the fire by another motorist.  The vehicle, which was owned by Mike Hansen Roofing of North Mankato, was a total loss.

Crews were on the scene for about an hour, with Highway 14 shut down during that time.

Ubel said the fire started in the bed of the pickup, but the vehicle was so badly charred that the cause was undetermined.

No injuries were reported.