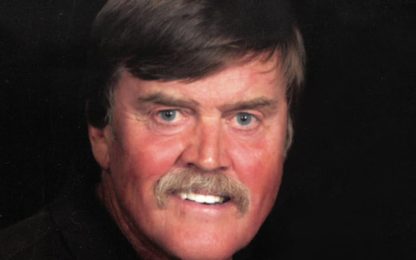 Orrin S. Estebo, age 80 of Redwood Falls, passed away Friday, December 18, 2020 at CentraCare – St. Cloud Hospital after an extended illness. A private family funeral service will be held.  The service will be livestreamed on the Stephens Funeral Service Facebook page at 10:30 a.m. Wednesday, December 23, 2020. A public memorial service will be held at a later date.  Interment will be in the Redwood Falls Cemetery.  Memorials can be directed to the Redwood Area Education Foundation or the Redwood Area Dollars for Scholars, Orrin S. Estebo Chapter. Facebook link may be found and online condolences may be sent at www.stephensfuneralservice.com.  Stephens Funeral Service – Redwood Valley Funeral Home is assisting the family with arrangements.

Orrin Schuler Estebo was born in Farmington, MN, on September 1, 1940, to Orville and Lutetia (Schuler) Estebo.  The family later moved to Cannon Falls, MN, where he attended school, graduating from Cannon Falls High School in 1958.  The importance of education to Orrin started at a young age.  After high school, he attended the University of Minnesota graduating from there in 1964.  During those years, he worked a variety of jobs to put himself through college.  He fulfilled his educational dream in 1971 by graduating from the University of South Dakota School of Law. On April 2, 1966, Orrin married Nancy Dangers in Fairfax, MN.  The couple resided in Minneapolis, MN, Algona, IA, and Vermillion, SD, before moving to Redwood Falls in 1971.  Orrin began practicing law with an established attorney, Wayne Farnberg, creating the firm of Farnberg & Estebo.  In 1976, Estebo and colleagues established the law firm of Estebo, Carey, Schnobrich, and Frank Ltd. in Redwood Falls.  The name of the law firm changed over the years but celebrated 40 years of practice in 2016.  Orrin remained in an “of counsel” role for many years.  Orrin was also active in many state and local law organizations. In the early 1980s, Orrin and his close friend, Dave Wood, became partners after purchasing Warrior Manufacturing Company, a producer of “quick hitches” used in the agricultural industry.  Orrin maintained his ownership interest in the company for 20 years.  As the success of this company grew, Orrin made investments in tracts of farmland currently farmed by several long-time tenants who were very near and dear to his heart.  His relationships with tenants were genuine and he often said that they were part of his family. Orrin always had a passion for education, and Nancy’s role as a special education teacher in the Redwood Area School district fueled his desire to financially support the education of thousands of students in the local school district and also at the University of South Dakota School of Law. Following Nancy’s death in 1995, Orrin made the first of many significant financial gifts to education.  His first gift of $100,000 allowed the school district to purchase technology labs and employ the district’s first technology coordinator. Additional gifts supported the Performing Arts Center and the facility, which is called the Estebo Performing Arts Center. Further gifts helped establish the Redwood Area Dollars for Scholars Chapter which carries his name. He gave significantly to the school’s music and art programs, and his generosity helped develop many school programs. Among these included the RVHS Robotics program and RVHS Student Trap Shooting Team. He paid the RVHS golf team dues for many years. In addition, there were several students through the years that Orrin helped get a start on their college education. Over a twenty-five-year period, Orrin donated several million dollars to the Redwood Area School District and the Redwood Area Education Foundation. Most recently, his donation of over $1.2 million was the pinnacle of his gifts helping move the district to construct the Orrin S. Estebo Career and Technical Training Center in 2019.  Bringing students and adults together to learn meaningful practical employment skills was one of his dreams and will benefit residents and employers in this region for years to come. He was awarded the Key to the City of Redwood Falls in the summer of 2019 for his commitment to the school district and the community of Redwood Falls. Orrin’s devotion to his alma mater Law School was strong. In 2013 Orrin gave over $2 million to the University of South Dakota Law School. Half of his gift went to fund the Orrin S. Estebo Law Scholars Fund which provides financial help to beginning law students in their second semester of study. The other half of his gift supported construction and renovation of the 35-year-old law school building at USD, including a larger common area for students and faculty to meet. Whether it be at the elementary, middle, high school or graduate school level, Orrin’s well-known belief that “Education opens doors!” was very apparent in his financial gifts and strong belief in vocational education as well as in graduate level education.  Orrin had a passion for Redwood Falls.  He established the Orrin S. Estebo Foundation to support the community of Redwood Falls.  He was active in many community organizations and a strong supporter of the Redwood Falls Golf Course.  Orrin had passion for hunting, fishing, golfing, traveling, riding his horse, and flying his airplane. He made several hunting trips out West and sat around many campfires with friends enjoying stories and laughs. He also spent countless hours studying French.  Orrin loved his many dogs over the years and truly believed that a dog is a man’s best friend.  On March 16, 2001, Orrin married Shirley Kronberg Erickson.  They resided in Redwood Falls until Orrin’s death. They enjoyed traveling the world as well as spending winters in Florida. Orrin embraced the virtues of humility, generosity, and gratefulness. He had a great sense of humor and a quick wit.  Those close to him experienced his humor on a regular basis. He loved his family very much.  He had a special relationship with a son by cultural exchange, Jan Honinx of Belgium.  He also had a special relationship with his great nephews, Deon and Jaydon Estebo.  The humor, lessons, and love that he shared with them will live on.