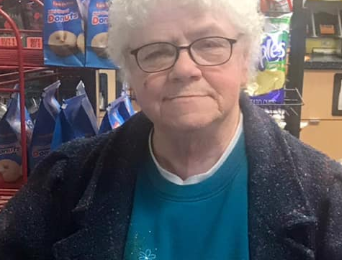 The Blue Earth County Sheriff’s Department is still searching for answers in the unsolved murder of an elderly woman who was beaten in her own home one year ago Sunday.

“It’s not uncommon for those of us in [law enforcement] to be brought into situations where a series of bad choices and actions of everyone involved play a part in the crime,” said Captain Paul Barta of the Blue Earth County Sheriff’s office as he stood in front of the media Monday.  “This case is different than that.”

Barta was talking of Evelyn Adams, the 76-year-old woman who has beaten in her rural Mankato home one year ago.  Adams was not expected to die, but succumbed to her injuries days later, on Feb 28, 2019.

“This isn’t a drug deal that went bad,” said Barta.  “It’s not an unusual fight that escalated.  Evelyn had no enemies.  She was beloved by everybody around her.  She truly is a victim.”

Adams’ stepson, Jim Adams, also stressed that his mother was an innocent victim and pleaded for anyone with information to come forward.

A blizzard ravaged southern Minnesota as deputies made their way to Adams’ home in South Bend Township in response to two 911 calls on the night of Feb 23, a Saturday.  Adams’ neighbor had called 911 at 10:53 p.m. to report one or two suspicious people at her residence.  About 20 minutes later, Adams herself called to report she’d been assaulted.  Law enforcement arrived about eight minutes later.

Adams was lucid enough to provide a statement to law enforcement after being transported to Mayo Clinic Mankato.  Barta said there was no indication her injuries would lead to her death.

Police feel they are close to getting justice for Evelyn Adams and her family, but say they need help to bridge the final gap in the case.

Since Adams’ death, police have conducted over 100 interviews, searching for answers to her murder.  Barta said his department has executed 10 to 20 search warrants, and reviewed hundreds of pages of records, data, photos, and video surveillance.

Barta said investigators definitely have persons of interest in the case, but aren’t specifying whether Adams was known to the killer or killers, or it was a random crime.

“We aren’t going to stop the investigation until we get answers,” said Barta We know there are people in our community that know exactly what happened, and have that last piece of information we need.”