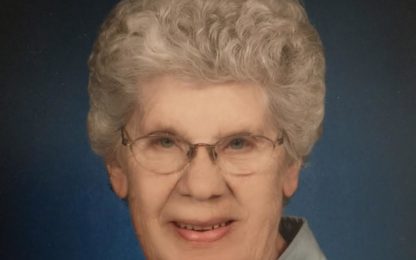 OlgaMae Daniels-Hicks, age 93 of Tracy, passed away peacefully Tuesday, January 19, 2021 at O’ Brien Court in Tracy.  A private family memorial service will be held at 10:30 a.m. Monday, January 25, 2021 with a Facebook livestream on Stephens Funeral Service Facebook page.  Interment will be in the Tracy City Cemetery.  Facebook link may be found and online condolences may be sent at www.stephensfuneralservice.com.  Stephens Funeral Service – Tracy Area Funeral Home is assisting the family with arrangements.

OlgaMae was born May 31, 1927 to Otto and Dorothea (Mikkelsen) Have in Milroy, Minnesota.  She was baptized on May 23, 1930.  OlgaMae graduated from Tracy High School on June 1, 1945.  She was united in marriage to Richard Daniels in Milroy on October 3, 1946.  Together they joined the Methodist church on December 2, 1951.  OlgaMae was a longtime active member of the Tracy Methodist Church, where she taught Sunday school and helped with other activities over the years.  OlgaMae and Richard farmed for many years near Tracy.  Richard passed away January 29, 1986.  On January 14, 1989, OlgaMae married Dr. Don Hicks in Tracy.  They resided at her farm north of Tracy, where she continued managing the family farm.  You could often find OlgaMae walking around the farm enjoying the four seasons and what they had to offer.  She enjoyed all the nature that came along with being in the country.  OlgaMae took great pride and joy in the neat appearance of her farm and could frequently be seen mowing her yard and gardening.  OlgaMae loved farm life, visiting with her neighbors, and spending time with family.