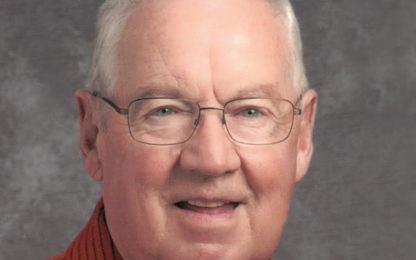 Wilmar William “Shorty” Engel, 82, of Tracy, Minnesota, died peacefully after a long illness, on Sunday, August 29, 2021, at Prairie Home Hospice in Marshall. Mass of Christian Burial will be held 10:30 a.m. Friday, September 3, 2021 at St. Mary’s Catholic Church in Tracy with a livestream available at Stephens Funeral Service Facebook Page. Visitation will be one hour prior to the service at church on Friday. In lieu of flowers, please consider a memorial tribute to the Shorty Engel World Language, Academic, & Athletic Scholarship Fund at Tracy Area High School. Memorials may be sent to Tracy Area High School Attention: Sonja Gasca 934 Pine Street Tracy, MN 56175 Online condolences may be sent at www.stephensfuneralservice.com. Stephens Funeral Service – Tracy Area Funeral Home is assisting the family with arrangements.

Throughout his life, most people didn’t know Shorty’s given name, and remained puzzled about its origin, since, at 6 feet 3 inches, Shorty was anything but short. When Wilmar was three years old his Grandpa Engel called him Shorty and it stuck. Shorty Engel was born on July 28, 1939, in Shakopee, Minnesota, to Florence Ann (Schroers) Engel and Wilmar Stephen Engel. He was baptized at St. Mary’s Catholic Church in Shakopee and confirmed at St. Nicholas Catholic Church in Carver, Minnesota. He attended Guardian Angels Catholic School in Chaska, Minnesota, then St. Joseph Seminary in Westmont, Illinois, and finished his college degree at Mankato State University (now Minnesota State University). After graduating in 1961, he came to Tracy, Minnesota, to teach French, intending to stay one year. On the occasion of accepting a Lifetime Service Award from Tracy Area Public Schools nearly 60 years later, in 2020, he explained, “I met a staff of teachers who were excellent mentors for me. I also met many community members who became friends. So many years later here I still am. I just finally retired from working at Tracy Area High School where I have loved working with another outstanding group of people.” That Shorty was awarded a Lifetime Service Award, “bestowed upon past Tracy Area School employees who have distinguished themselves in life, work, and community service,” is a clear indication of his enormous impact over decades on students, colleagues, friends, and his town. At Tracy High School Shorty taught French until 1999, then worked in the English Department and with ESL programs, finishing his career as a long-term substitute in 2020. As with many teachers of vision, Shorty developed an outstanding French program, and, beginning in 1973, organized student trips, first to France, then to Spain as well, enlarging the world of Tracy High School students taking French and Spanish, and was soon involved in state-wide planning of trips. Many parents, community members, and Shorty’s wife, LouAnn, also went on these trips. All in all, Shorty was involved in forty-four European trips. In 1981, his French program was chosen by the American Council of Teachers of Foreign Languages as one of the nation’s 50 award-winning language programs. In 1992, Shorty was presented with an award for Outstanding Service and Support for Foreign Languages and Cultures Education by the Minnesota Council of Teachers of Foreign Languages. Along with his academic achievements, Shorty was well-known as a mentor and coach of a number of sports—baseball, volleyball, girls and boys basketball. It was on the basketball court where he achieved his greatest success. A year after leading the Tracy-Milroy girls’ basketball team to a Class A consolation championship, his 1988 team defeated three unbeaten teams on its way to the Class A state title. The next year, the Panthers finished fourth at state. In three different stints covering seven years of basketball coaching, Engel amassed a 137-56 record. During his coaching years he worked with many outstanding head and assistant coaches who became lifelong friends. Besides coaching, Shorty also played baseball, in his youth with the Carver Black Sox, and throughout the 1960s and 70s, with the Tracy town team, the Engineers, as a first baseman and hard-throwing left handed pitcher. He was known affectionately to his teammates as Flame Thrower. He and LouAnn also enjoyed playing golf. In the community, Shorty worked at the Tracy Municipal Pool and then the Tracy Aquatic Center for thirty-five years, most of them as manager. He also served as a commissioner and as chairperson of the Housing and Redevelopment Authority Board of Tracy (Twin Circle Apartments). For many years he was a member of the Multi-Purpose Center board, and a member of the Community Education Advisory Board as its senior citizen representative. On January 6, 1966, Shorty married Nancy Jacobs; later they adopted Maureen and Stephen. After their marriage ended, Shorty met LouAnn Shaw, and, on August 20, 1994, they were married, merging two families. Shorty and LouAnn spent twenty-seven happy years together.

Shorty Engel had a passion for travel, world languages and French and Spanish culture, and wished to be remembered as a teacher and a coach, and as a man who loved his family.