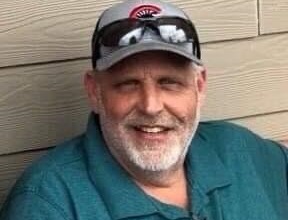 A live stream of the service will be available at the following link: https://my.gather.app/remember/bill-kostohryz

William Kostohryz was born on March 25, 1959 at St. John’s Hospital in St. Paul to Donald and Betty (Roth) Kostohryz. He was raised in Arden Hills and graduated from Mounds View High School in 1977. In high school he began working in retail and quickly worked his way to management. He moved to the Brainerd Lakes area where he worked for Montgomery Wards. Bill made many lifelong friends while working there. He met the love of his life, Dawn Renee, and they married on January 13, 2001, together they raised their eight children. Bill and Renee moved to Olivia in September 2008. He was the manager of the ALCO store and later Mac’s Hardware in Olivia. He loved the small town community and the connections that he made. Bill was a devoted husband, father, and grandfather. No matter the occasion or whatever they were doing, time spent with his family was most precious to him. Bill shared his wisdom with many and enjoyed having deep conversations with his family and friends over Captain Cokes. The VRBO at South Long Lake was a vacation spot where the family shared numerous memories. Bill liked playing marbles and fishing in his boat with Renee. Following the Dallas Cowboys and BOLD sports teams were a hobby of his that brought him much joy. Bill will be remembered for the immeasurable love he had for his family.